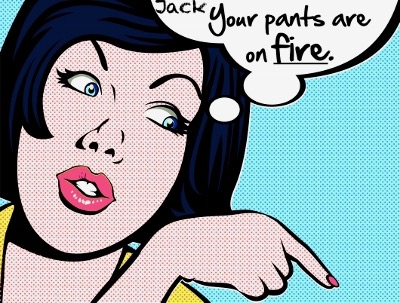 “Despite various trumped up charges and some very dubious convictions against the Kelly family, Superintendent Nicolson’s memo to his police officers within the North-East confirms the police were instructed to harass and intimidate the family in an effort to remove them from the district.”

So begins a post that appeared a couple of weeks ago on Jack Petersons Facebook page titled “An Introduction to Ned Kelly”. The page’s title would make you think its purpose was to inform anyone unfamiliar with the story, of some of the basic truths about Ned Kelly. Such people wouldn’t realise it, but sadly, that single sentence is entirely made up of lies, as is so much of what Jack Peterson writes about Ned Kelly. Petersons intent seems not to inform the unfamiliar about the Kelly story but to misinform them and have them unwittingly accept Kelly propaganda as true history. Its what one of Petersons fellow-travellers, a bloke who used to describe himself as a “Neducator” used to do to unsuspecting school children – tell them lies about Ned Kelly and have them going home thinking Ned Kelly was an Australian hero. Fortunately almost nobody was taken in by him and he has given up.

My purpose is not to try to correct Peterson and the ever-diminishing clique of un-australians like him who believe that the Kelly mythology is true history. Ive tried to engage such people in constructive debate for years and achieved nothing, because they’re incapable of engaging in debate.They’re not interested in considering  anything such as a fact or an opinion that might challenge their fixed beliefs about Ned Kelly. Like Peterson all they are interested in is repeating to themselves and promoting to anyone who will listen, unhistorical fairy stories about the Kellys. They’re also interested and actively engage in the abuse and vilification of everyone who doesn’t agree with them – and you don’t have to look far to see it. Ive been their target for years, and so have academic authors Morrissey, MacFarlane and Dawson who collectively have exposed the lies,  the cover-ups and the fake history that is at the heart of the Kelly mythology. Leo Kennedy has been on the receiving end of it lately, for daring to write a book called “Black Snake”.  Any ‘debates’ they have are among themselves, in places from which anyone who disagrees with them has been excluded, places where people like Peterson can get away with whatever nonsense they want to discuss, knowing that they won’t be challenged. A case in point is the Iron Outlaw sponsored  Ned Kelly seminar in Chiltern in a couple of weeks. It will be addressed by a line-up of conspiracy theorists, internet bullies and self-promoting Kelly fanatics pretending to be historians and ‘researchers’. I doubt they will be as bold as the Flat Earth society, which posts the speeches made at its seminars on You Tube – but the Kelly seminar speeches, with one or two exceptions will be equally as ludicrous in their unhinged quality.

No, my purpose, as long as the Kelly fanatics keep posting lies about Ned Kelly and the outbreak, is to keep pointing out that they are liars and posting the corrections to those lies, so anyone with a genuine interest in knowing what to believe will be properly informed, not  misinformed!

So, what are the lies in that sentence from Petersons FB page?

Lets look at the first part of the first sentence:

“Despite various trumped up charges and some very dubious convictions against the Kelly family….”

I am not permitted to post to that page – but if I was I would challenge, and do challenge Peterson – or anyone else for that matter – to supply a list of the ‘trumped up charges’ and another list of the ‘very dubious convictions’ that he refers to. He is welcome to post them to this Blog as a comment but I already know that he won’t – and in typical Kelly paranoid conspiracist fashion will probably say that I would delete them if he did ! So then, to prove me wrong he can post his lists to his FB page instead – and I wouldn’t be able to delete them from there – but he won’t do that either. The reason he wont is that no such list could be created. A ‘trumped up’ charge refers to a charge that is false, that has no evidence to support it, that it is entirely invented as a form of harassment – and believe me I’ve looked at ALL the charges – and there are literally dozens – and not a single one was ‘trumped up’. Not one. Discharge or acquittal or being found not guilty doesn’t mean the charge was ‘trumped up’ any more than being found “Not Guilty” means a person is necessarily innocent. The same is true for the convictions which Peterson calls ‘very dubious’. Let him post a list of these ‘dubious convictions’ and say what is dubious about them – but again I predict, no such list will be forthcoming either from him or anyone else in the Kelly camp. They will run as fast as they can from an actual debate about substance every day of the week.

What I COULD provide is a list of highly dubious acquittals and discharges, where Kelly clan members escaped convictions for serious offences, or were convicted of lesser offences because of the highly dubious behaviour and lies told by witnesses for the defence who were often relatives neighbours and friends of the Kellys. What I could easily provide is a list of the leniency and the fair and balanced approach of the justice system which often enough operated to the Kellys advantage by its strict adherence to the rule of law, dropping charges that could have been laid, remitting of sentences and police offers of help made to the young Kelly, and payments of rewards to others. The facts and the lists which COULD be provided show the exact opposite of what Peterson and Kelly fanatics claim and blindly believe in their fact-free echo-chambers.

The next part of Petersons sentence is this:

Here Peterson is referring to a report issued by Nicolson after making a tour of the North east in 1877. He visited Mrs Kelly at her home and said she and the girls were living in ‘poverty and squalor’ at a time when we know from his own bragging that Ned Kelly was raking it in selling stolen horses and living the high life of what Kelly himself described as a ‘rambling gambler’.  This is one of those inconvenient truths that the Kelly fanatics don’t want you to read about because it shatters their claim that Ned Kelly gave a damn about his family. He was living the high life while they were living in ‘poverty and squalor’ – what kind of Australian Son is that?

‘I had expressed my opinion since to the officer in charge of that district that without oppressing the people or worrying them in any way that he should endeavour, whenever they commit any paltry crime to bring them to justice and send them to Pentridge even on a paltry sentence, the object being to take their prestige away from them which has as good an effect as being sent to prison with very heavy sentences’

What Nicolson is advocating here is simply good policing – leave these people alone but if they break the Law, let them have it with both barrels. He was referring to an extended family who over the preceding 15 years or more had been involved in all manner of  seriously criminal activity, from domestic violence, to sexual assault, violent criminal assault with infliction of grievous bodily harm, arson, animal cruelty and stock theft. Police resources were stretched. Nicolson had had enough!

Jack Petersons deplorable habit of misinforming people looking for an ‘Introduction’ to Ned Kelly is typical of all advocates for the Kelly myth. They ALL ignore facts, invent or misconstrue evidence, immerse themselves in conspiracy theories, cherry-pick the bits that they like, and pretend they haven’t seen all the rest in an effort to maintain the delusion that Ned Kelly is an Australian hero. And of course,  they attack and vilify anyone who doesn’t agree with them.

When you read the stories of true Australian heroes, like the ones I posted last week you realise what a thoroughly sad and inconsequential individual Ned Kelly was alongside the real ones. The same should be said about the liars and deluded conspiracy theorists who promote him.

17 Replies to “An Introduction to (Lies about) Ned Kelly”