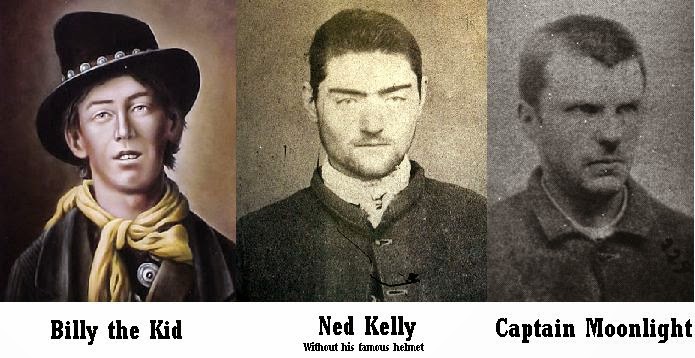 In my deleted forum, I had planned to present an overview of the various Internet Sites that currently exist, as a sort of Guide to what was available out there and what to watch out for. So I shall start again.

One of the easiest to find using your search engine is of course the Ned Kelly Forum, a place set up within the last couple of years. The Clue to what you will find there is contained on the welcome page, where the NKF is described as a “Pro” Ned Kelly and a “celebration”. The Forum contains many discussions about a large variety of topics that are mostly peripheral to the core elements of the Kelly story, such things as members favourite Kelly songs, books and movies, discussions about the annual Ned Kelly Weekend at Beechworth, and items that appear in the news from time to time.
The most recent discussions have been about some old gates that were purported to have come from the old Melbourne gaol, the site of Neds execution. In fact as the material presented makes clear, there is not a scrap of evidence linking the gates to the Old Melbourne gaol and nobody has any idea where they came from. The source of that claim has been completely discredited because it also said the gates were erected in 1937 when in fact they were erected in 1930. Never-the-less the post is entitled “Old Melbourne Gaol gates at the Frankston Oval” and a couple of members seem to think that this has now been established and heartily thanked the person who brought this to their attention. Having said all that, it was an interesting discussion that showed how rumours and misinformation can be incorporated into accepted history, and that very careful research is needed to uncover the truth. This is a lesson that I think most of the NKF will have missed but is very relevant to the search for the truth about all historical claims, and no less important in the search for the real Ned Kelly.
In addition to the publicly accessible threads they have a Private Members Only thread not accessible to non-members . Security and the identity of members is a preoccupation of the people who run the site, and recently everyone was forced to change their passwords because it was thought that someone leaked another members phone number. Anyone who didn’t change their password was immediately relegated to the status of Contributor rather than Member and would no longer have access to the secret Members Only area.
To me this preoccupation with identity and with secrecy seems quite paranoid. It is clear from the History of the site that members with alternative viewpoints are quickly set upon by the resident Bully and either resign or get expelled. There was a thread devoted to the Kelly Gang Unmasked book when it was first released but contributors who defended the book – as I would have – were expelled, and the thread removed, but there are still traces of what happened to be found at various places. For that sort of reason, and also because of the sort of vile attacks on me and other posters to my forum made online by pro-kelly people in the past, I would never consider joining such a Forum where people who have been proven to be vile internet pests can have free access to my identity and email. In my previous Forum I described the NKF as the North Korea of the Kelly World – and I still see it as an apt description, because it is a place where there is expected to be unquestioning acceptance and devotion to the dear Leader, a readiness to censor, delete and expel dissidence, a deep fear and distrust of “outsiders” and a rigid enforcement of ideology to keep the world of the NKF calm and free of controversy. Its worth a visit, but after a while the endless back slapping and hearty birthday wishes and trivial discussions becomes tedious.

Lets try that again…
(Visited 22 times)
No comments yet