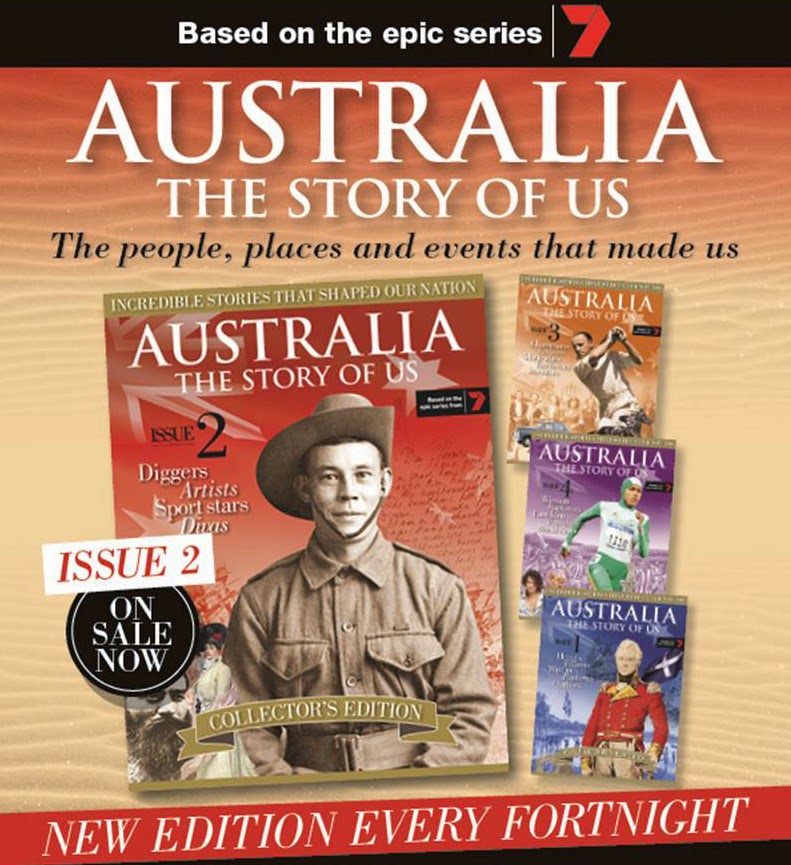 When I saw the image of Ned Kelly on the cover of a glossy magazine prominently displayed at the Newsagent the other day, I picked it up thinking to myself  “Oh no, here we go again, more nonsense about Ned Kelly”. The Magazine was titled “Australia The story of Us” and is apparently being issued in conjunction with a TV series of the same name on commercial TV. This was issue two of the Magazine which highlights “The extraordinary people places and events that shaped us” and  proclaims itself to be a description of “How our ancient land became a Modern nation”.
Inside there are lots of illustrations and photographs, and 25 short chapters, each purporting to be  a story about a significant moment of Australian History. In keeping with its commercial TV origins, the magazine is actually a disgraceful unbalanced and superficial pretense at History telling that for many will be swallowed as “Educational” but in fact its more like Propaganda for a sanitized and white liberal view of Australia. Reading it makes my skin crawl. Its appalling that garbage like this is published and beamed into Australian living rooms and consumed as “information”. If you try to watch the programmes on the website, advertisments  constantly intrude and make it unbearable.
For a document and TV series that thinks its telling “The Story of Us” why are there four pages devoted to a hyperbolic story about Keith Murdoch – Ruperts father, six to Dame Nelly Melba, six to Ned Kelly but only one to the Stolen Generations, one to Womens Suffrage, and two to the White Australia policy? Norman Lindsay gets two pages – but in keeping with the prim and proper ethic of this piece of nausea, none of the photos are of his half naked women, the feature of his work that is most well known! One in five articles is about war and Gallipoli, and I suspect the main purpose of the entire production is about further manufacturing  and mythmaking of the ANZAC legends.
So what of Ned Kelly?  Well only the topic of Federation took up more space in the magazine, and Ned was displayed on the cover alongside an obvious ANZAC soldier, and a woman, perhaps Melba, shrunk to occupy less space than Ned Kellys head. But really, to have Ned Kellys image posted alongside the ANZAC on the front cover, and  for his exploits to be given more attention than Nurses, Federation or the Overland telegraph is to vastly and ridiculously over value even the greatest Kelly fanatics delusions about what he achieved.  The most the Fanatics ever come up with is some minor Police reforms and some further improvement of the Legislation governing ownership of land, a process that was already in train and in constant evolution long before the Outbreak. In truth apart from boosting movie making and the Tourism and Souvenir industries of the north East, Ned Kellys actual contribution to “The Story of Us” is almost non-existent.
As I expected the article perpetuates the Kelly Myth by repeating the tired old “hero or villain” party trick, and as usual ignores his criminal record of violence and stock theft, and gets fundamentals of the story plain wrong. It repeats Neds lie that he was hundreds of miles away from home at the time of the Fitzpatrick incident; it says the first Trooper killed was Kennedy; it says Neds last words were “Such is Life” ; theres a photo of a document said to be the Jerilderie Letter : its not; theres a photo said to be of a man holding Ned Kellys skull in 1969 – he wasn’t!
Unfortunately the magazine doesn’t identify who wrote this piece of rubbish, or any of the other pieces in the Magazine. However given the standard of the Kelly article there would be no reason not to believe the other articles, and the TV program itself  will be riddled with mistakes and historical untruths, and amount to  nothing more than cheap commercial mangling of Australian history.
This Magazine and story about Ned Kelly is mentioned on the NKF Facebook page, and “Liked” by 10 members. They would either have to be deeply ignorant – which is entirely possible – or else have not actually read this article – which is more likely –  to have “Liked” it. I have been banned from posting to Ned Kelly Forums Facebook Page, so cant comment about it there but it doesn’t really matter because they all visit this Blog regularly and when next they do will learn something useful about “The Story of Us”. Maybe then they will go back and “Un-Like” it – that’s what I would do!
(Visited 34 times)
Comments (3)