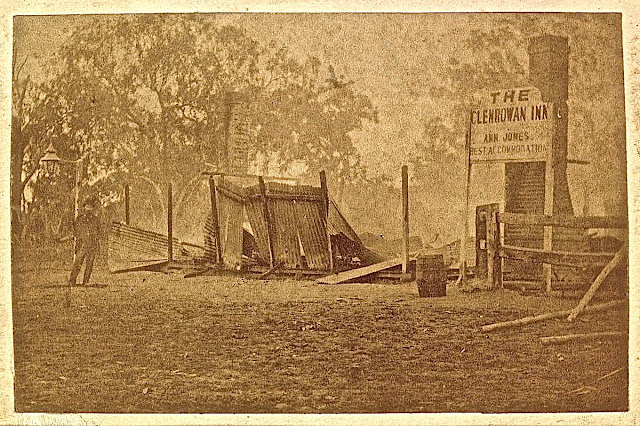 When the guy that I met in Glenrowan told me about his belief that Dan and Steve hadn’t died in the inferno that destroyed Ann Jones Inn, it wasn’t the first time I had heard this story, but I had never given it more than a seconds thought before. I didn’t think any knowledgeable Kelly buff of any persuasion would take those rumours seriously, and when I mentioned them in a Blog Post last year likened them to  ‘claims of the caliber of  UFO abductees  and 911 conspiracy’
But then I went to Glenrowan and met that guy, who I now have learned is  Mr Gary Dean, a serious and knowledgeable Kelly buff and the author of several books about the Kelly Outbreak who clearly is convinced Steve and Dan survived. Maybe I shouldn’t have dismissed Dans survival so readily – but then, on the other hand Mr Dean did seriously entertain other ideas that were not too far from  ‘UFO abductees  and 911 conspiracy’.
There are several obvious major problems to be explained by people like Gary Dean if they expect anyone to take them seriously. Firstly, how would anyone in a cellar get out and get away unseen from the middle of the wreckage of the Inn, in broad daylight when it was surrounded by police, the press, photographers and the general public who flocked to Glenrowan to observe the goings on before during and after the siege? The Police raked two bodies out of the wreckage but didnt see two men climb up out of a cellar and slip away into the crowd? They didnt even report a cellar. Please explain why nobody ever reported seeing or meeting the two drunks whose incinerated  unidentifiable bodies were said to be Dan and Steves? And the Policeman who entered the burning Inn who positively identified Dan?
I remembered later that in ‘The True Story of Ned Kellys Last Stand’ Paul Terry had an entire chapter devoted to the subject – Chapter 11 : Cellar Mystery. In my  review of that book last year I dismissed it as a pointless exercise whose only purpose was to bulk the book up a bit. But Ive been back to read it again, now that my curiosity about  Dan and Steves survival has been aroused, and Ive done some reading around the subject to see if I was wrong to have dismissed these stories so readily.
Actually I dismissed the entire Dig at Glenrowan, the subject matter of Paul Terrys book as a pointless exercise that began without defining what it really wanted to discover, continued as a sort of hopeful treasure hunt and concluded without adding anything of importance to what was already known.  But now I realize there was in fact one really important answer they could have obtained at that dig, something many Kelly buffs would have been desperate to know, and could have been a worthwhile focus of the whole enterprise, and that was to prove once and for all that the Ann Jones Inn actually had, or did NOT have, a Cellar.  The reason that would have been such a useful finding, is because it would establish once and for all if there was indeed a place where Dan and Steve could have sheltered and possibly survived the inferno.  Without a cellar, the survival stories don’t have a leg left to stand on but finding a cellar would at least have meant it might have been possible. Reflecting on the ghastly deaths in recent Australian bush fires, Paul Terry doubts even a cellar would have saved them – but at least finding one would have kept the possibility open. On the other hand, if no cellar was found all the survival stories can be dismissed, because they all begin with survival in a Cellar, and in one fell swoop all the claimants to be Dan or Steve exposed as crooks, or at least as delusional cranks.
But that didn’t happen. The Dig proved there wasn’t a Cellar under the Inn but they didn’t dig at the place where the kitchen was, so the possibility remains. A golden opportunity to lay a Kelly Myth to rest went begging, and I am left wondering about other ways that these claims could be investigated.
One obvious place to test the idea is in the words of those men claiming to be Dan or Steve. Searching for them, one immediately encounters Councillor Paul Tully of the Ipswich City Council in Queensland.  According to the Queensland Times of 2nd September 2011 hes been ‘hot on the trail of Queenslands connection to the Kelly Gang for 20 years’ and is shown in the Ipswich Cemetery where there is a memorial to James Ryan, a man who claimed until his death in 1948 that he was Dan Kelly. The Memorial includes a replica Kelly helmet, and an inscription that includes this statement  “Hundreds of historians from all over the country and even those who had associations with the Kellys could not disprove that James Ryan was not Dan Kelly” Tully has been trying to get this mans remains exhumed and subjected to forensic analysis to see if he was.
James Ryan is also the subject of a 2002 publication called ‘Burnt to a cinder was I?” , written by  Vince and Carolyn Allen. Vince’s grandfather Jack claimed to have known James Ryan rather well and was convinced he was Dan Kelly. 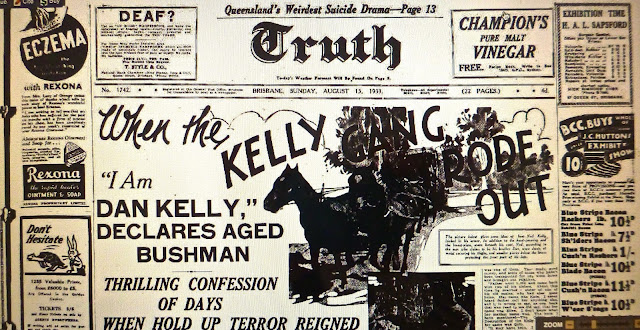 If you search Trove for James Ryan you will find articles about him and Jack Allen in Queensland’s ‘Truth’ newspaper dated Sunday August 13th 1933.(HERE)  and also Sunday 22nd and 29th December 1935. Here is a quote from the first paragraph of the 1935 article – read it and spot the obvious mistake:
“But this old man says he escaped from that fire. Racked by agonising burns, he crawled to the nearby scrub, and from there watched the armored Ned Kelly’s last savage stand against a mob of police and civilians.”
There are many other mistakes in the claims of James Ryan that might only be obvious to someone who is familiar with the story of the Outbreak. People up in Queensland  back then, and it would seem even modern City Councillors might not have been all that familiar with the detail of the Outbreak and may not have spotted  much of the nonsense in Ryans claims, such as a claim that Neds father  was still alive when Ned went to Gaol, such as his claim that the Gaol Ned was sent to was the Berrima Gaol, that Red called Ellen ‘Kate’, that he never knew who her father was, that he and Ned never went to school, that he had a sister called Nora, that Ned wore his armour out on the highway and robbed the Ballarat Gold escort, and even that he shot and killed Fitzpatrick!  He elaborates many colourful stories that are vaguely credible but completely beyond verification, but if a person cant remember important verifiable facts like when his own father died, who his siblings were, and  when he gets the sequence of events at Glenrowan so mixed up, what credibility does he have? I wonder if Councillor Paul Tully knows that Ned was captured early in the morning and the Inn set alight at 3pm? If Ryan really had crawled out of the ruins of the Inn, Ned by that time would have been in bed at the Station under guard and being attended by the doctor. Ryans claim to have witnessed Neds last stand, the dramatic climax to the entire Outbreak, was a lie. This basic fact alone completely ruins Ryans credibility.
I’m not sure but I suspect that back in the 1930’s it wasn’t common knowledge that there are people with weird personality disorders who like to claim they were part of something big in world affairs, and become the centre of attention, gaining status and even wealth they would otherwise never get. There have been fake Holocaust survivors, fake 9/11 survivors, fake war heroes, fake Celebrities, fake cancer survivors, fake orphans – all sorts – and most of them get a huge leg-up from gullible and lazy journalists and other publicity seekers who just never bother to do basic fact checking. Do a search for “The woman who wasn’t there” for an interesting read about a woman who claimed to have survived the Twin Towers Collapse.  Also imagine how much harder it would be to disprove her story if she came forward 50 years after the event, like James Ryan did.
Clearly James Ryan was one of those attention seekers. Maybe he was genuinely delusional, and Jack Allen was taken in by him. However in the modern age of Internet and Google, Vince and Carolyn Allen, and Paul Tully have no excuse to be so ignorant of the facts of the Kelly story that they have failed to spot the litany of nonsense, the tall stories  and lies spun by James Ryan.
So thats one of the pretenders dealt with! What about all the others? I will deal with them in Part Two. Meanwhile, your thoughts please.
(Visited 101 times)
Comments (5)

5 Replies to “Did Dan Kelly die at Glenrowan?”