Ive just finished reading a really interesting book called “The Myth of The Lost Cause, and Civil War History”. Its about the American Civil War, and how the side that was defeated promoted a particular view of what happened in the hope that history would record things somewhat differently from the reality of what actually happened. Its often said that history is written by the Victor, but this is an example of the losers attempting to write it. I found the insights into the way history is interpreted and used to meet cultural  needs very interesting indeed, and realised that this is a universal phenomenon that springs out of a deep human desire to make sense of failure, defeat and loss. An excellent Lecture about the Lost Cause given at the Smithsonian can be viewed HERE. 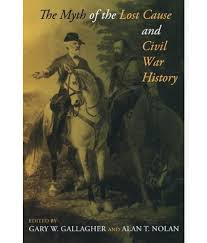 “White Southerners emerged from the Civil War thoroughly beaten but largely unrepentant. Four years of brutal struggle had ravaged their military–age male population, vastly altered their physical landscape and economic infrastructure and destroyed their slave-based social system. They grimly acknowledged the superior might of the United States military forces and understood the futility of further armed resistance. Yet the majority of ex-confederates who had remained hopeful of establishing a new slaveholding republic until late in the conflict did not believe they had fought the war for an unworthy cause. During the decades following the surrender at Appomattox they nurtured a public memory of the Confederacy that placed their wartime sacrifice and shattering defeat in the best possible light. ….
Widely known then and now as the Lost Cause explanation of the Confederate experience it drew strength from the pages of participants memoires, from speeches at Veterans reunions, from ceremonies at the graves of soldiers killed while serving in Southern armies and other commemorative events, and from artwork with confederate themes.
…..
In terms of shaping how Americans have assessed and understood the Civil War, Lost Cause warriors succeeded to a remarkable degree”

I doubt there would be few people with an interest in the Kelly story who would read those words I’ve quoted from the Foreword to the book, and not notice some interesting parallels between the Myth of the Lost Cause and the Legend of Ned Kelly. Certainly, in a similar way Kelly Warriors – the last of whom was Ian Jones ( see my post HERE ) –  have also succeeded to a remarkable degree in the way they have shaped how Australians assessed and understood the Kelly Outbreak.
Both myths are accounts of historical defeat and failure reworked to sound like heroism and something noble, the ultimate failures of their leaders General Robert E Lee and Mr Ned Kelly ignored in the creation of an image of them as heroic and valiant. Like the Civil War myth, the Kelly Myth has also been created and sustained by the ‘memoires’ of participants, speeches, graveside ceremonies, ‘other commemorative events and ‘artwork’ : think of the Jerilderie  Letter, the Kelly symposium, November 11th  execution remembrances, the Sydney Olympics opening ceremony, the Ned Kelly Weekends, the Nolan series of paintings, the numerous Ned Kelly folk songs, plays, movies and books for adults as well as children that promote the Kelly myth.
Jubal Early, someone I had never heard of before, was one of Robert E Lees principle Lieutenants, and one of the prominent creators of the Lost Cause Myth. He was a sort of Jerome J Kenneally, in that he sought to write a record that not only glorified the memory of the defeated South, but blackened the name of Ulysses  Grant,  the Union General, and belittled his resounding successes. JJKennealy was of course the writer who in a similar way so dramatically laid out the vision  of Ned Kelly the hero and so determinedly spread about the myth of Police and Judicial corruption  being the cause of all the mayhem that was the Kelly outbreak. Much of what Kenneally wrote is now seen as unsupportable hyperbole and historical misrepresentation, but the effect of the book was perhaps to propel the Kelly myth into an orbit that has been sustained by others – such as Max Brown, Molony and Jones –  even as the Kenneally booster rocket fell away. (Read my Post about JJKenneallys book HERE)
The obvious big difference of course is that one Myth is about an Army of rebels seeking to establish a Republic, whereas the Kelly myth is really just about one rebel, Ned Kelly. In the Kelly legend, the entire notion of a Republic was invented afterwards as part of the process of converting murderous criminality into something ‘noble’, whereas in the Civil War, it was indeed the whole point of the conflict. 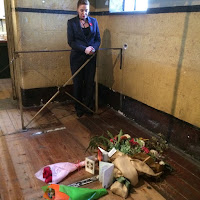 The last Chapter in this book is called “The Immortal Confederacy”. It records how for many people in the South, belief in the Lost Cause acquired many of the appearances of a religion, with devotees pledging their allegiance to it in dramatic ceremonial proceedings in which symbols of the Confederacy were elevated to the status of sacred relics, emblematic of the Lost Cause and the sacrifices made by Confederate Soldiers in its defence.  I thought of the Green Sash, the Kelly Armour, Joanne Griffiths praying at the OMG on November 11th, and Ian Jones saying that Ned Kelly was portrayed in a book that influenced him as a 10 year old, as ‘an unbeatified saint, the greatest hero who ever lived’. I remembered my own observations, reported in a Post when this Blog was just beginning, over two years ago and worth reading again HERE, in which I likened Kelly followers to religious fanatics. Kelly followers denounce people who disagree with them as ‘anti–kelly’ in the same way Mormons, for example, denounce writings that don’t support their religion as ‘anti-Mormon’. People often refer to me as being ‘anti-Kelly’ but I am not. What I am ‘anti’ is Kelly claims that are wrong, that are unhistorical, that are lies or exaggerated. I am not ‘anti’ anything that is true about Ned Kelly.  The other similarity between religious fanatics and Kelly followers is that they never allow reason and logic and actual facts about their story to count against it. (For example, the fact that Ned Kelly made so much money from stock theft – and he boasted about it – that he dressed well and lived well while his mother and sisters were living in documented poverty and squalid filth is never seen as evidence against the claim that the Saintly Ned Kelly was devoted to his family)
At present in Australia, its hard to know exactly how successful the Kelly Mythmakers have been, but certainly many Australians don’t realize that much of what they understand to be the truth about Ned Kelly is a collection of Myths. I am in no doubt however that since The Kelly Gang Unmasked was published, and with Morrisseys book, and with a little help perhaps from this Blog, the numbers of Australians who are seeing through the mythology is growing steadily. One proof of that is the demise of NKF and the IO sites, the absence last year of interest in holding the Ned Kelly Weekend and the skyrocketing interest in this Blog. One of the myths that I think would help to be dispelled sooner rather than later, is that Ned Kelly is only interesting if he is regarded as a hero and an Icon. Replacing the myth with the truth about Ned Kelly won’t destroy the Tourist trade of the North East, or the Kelly Trail, or of the Kelly Vault. Crime, criminal behavior and murder, as the many TV crime shows attest, is hugely popular. I think if the North East accepts that truth, they will be less inclined to defend the Kelly myths and instead embrace the historical truths about him that they can teach without cringing. They will eventually look back and say how on earth did we ever get conned into promoting the lie that a serial cop killer, bank robber, liar and psychopath was some sort of icon? When you stand back a bit and think about it, the kelly myth is preposterous. Another Lost Cause.
(Visited 50 times)
Comments (15)