I’m going to make this weeks post a short one because frankly, Ive been very busy with work, and haven’t had as much free time as I usually have for writing Posts. This Post will be especially of interest I hope to people who own Justin Corfields “Ned Kelly Encyclopaedia”, one of the ‘must-have’ books for anyone seriously interested in the Kelly story. I would go so far as to say if you call yourself a Kelly fan and don’t have this book then you’re not serious. I use it all the time.
About a week ago there was a rather unpleasant debate on the True Story Facebook page regarding a Kelly fanciers assertion that the Police took a Gatling Gun to Stringybark Creek. That suggestion has never been made anywhere else anywhere at any time as far as I know, but the Kelly fancier refused to back down, and wouldn’t volunteer the evidence or his sources for his extraordinary claim. With the internet and Google being what they are, finding out  what a Gatling gun is and what it looks like is ridiculously easy, and anyone who bothered to do so would quickly realise the absurdity of the suggestion  that one was dragged into the rugged impenetrable Wombat Ranges in the hunt for Ned and Dan. Eventually, the person who made the suggestion disappeared, cursing and swearing in typical Kelly fancier style.
During this time, I looked at what Justin Corfield had to say about guns used in the outbreak, and though I realise that most Kelly fanciers would not need to own Corfields book – because they already know everything – the entry about Guns might please them but it surprised me, because I thought it created a picture not unlike the one Kelly fanciers believe and I often have seen them claim about SBC, that the Police were ‘armed to the teeth’. Ive never thought that was the case.
There’s much information that’s interesting in this entry, and Corfield writes “There has been much debate over the weapons used at Stringybark Creek”. He goes on to describe the weapons the Gang used and acquired during the holdup and subsequently, and recounts how they got each of them and what happened to them. By the time they got to Glenrowan Corfield says the Gang had ‘at least 15 revolvers, two double barrelled shot-guns, four single-shot rifles, three single-shot carbines,  four repeating rifles and the original sawn off carbine used at Stringybark Creek” Funny that nobody ever says the Gang was armed to the teeth, but of course they were! Corfield says that Neds carbine, the one he said could shoot round corners and that was held together with string, ended up at the Museum of Applied Science in the 1950’s ‘until it was thrown away’ !! What?? Thrown away? By whom? And why? Unfortunately here Corfield provides no further information about this appalling blunder!
Once the narrative documenting the Gangs armoury is completed he finally turns to the Police weaponry in a paragraph that begins:
“The Victoria Police were also heavily armed. The mounted troopers were armed with a Webley revolver and Colt revolvers were issued to foot police. There were also twenty-two .577 calibre single-shot  Enfield rifles distributed among the police of the region. With the shooting of the three Policemen at SBC the Police were issued with four more Spencer repeating rifles, eighty-six breech loading rifles, sixty two Martini-Henri rifles and 256 revolvers.”
All-in-all this does sound like the police were ‘armed to the teeth’, as Kelly sympathisers often say. However, when it comes to SBC this was most definitely not the case. The only additional arms police took to SBC in addition to their standard issue revolvers were a shotgun borrowed from a local Reverend, and a Spencer rifle borrowed from a gold escort the day before they left Mansfield. When the Kelly gang of four with two rifles and a revolver ambushed the two police remaining in the Camp, all the unsuspecting policemen had between them was Lonigans revolver – as near as they could be to being unarmed.  ( Ignorant Kelly fanciers usually say this was a fair fight for gods sake!)  Corfield listed carefully exactly what guns the Kelly’s took to SBC, but neglects to do the same thing with what the police had, and as I pointed out starts his descriptions of police arms with “The Victoria police were also heavily armed”.  In regard to what happened at SBC this is clearly a misrepresentation, and a serious one, given the contentious nature of that terrible incident. One has to assume this oversight wasn’t deliberate but it was surely careless.
In fact, the more I make use of Corfield’s encyclopaedia, the more I realise its author has a distinct pro-kelly bias, as indicated in this entry, where the Kelly  myth about police being armed to the teeth at SBC is perpetuated.
There’s a review of this encyclopdia  HERE. It was written by Alex McDermott, a Kelly scholar of yesteryear who has in the past debated Ian Jones and published a commentary of the Jerilderie letter. Sadly he seems to have dropped out of the Kelly debates ( though I suppose he could be Dee! ) Like me he thinks this encyclopedia ‘is a collection of marvels, built on significant flaws.’ By flaws he refers to the influence of Corfield’s Kelly-sympathetic upbringing on how he chooses to portray the events and people he includes and what he choses to ignore.  McDermott says “I challenge the reader to find in this extensive and voluminous work any one incriminating fact, moment, incident or detail that is not justified, explained away, interpreted with a sympathy that at times suggests prejudice.” 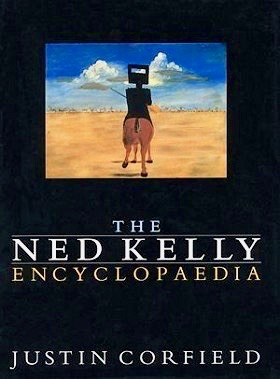 Overall though, his review is positive, because much of what the encyclopedia covers isn’t in the least bit controversial. It’s the best reference book by a long way, but one has to be aware of its shortcomings. Copies can still be found at Abebooks for $60 – $70 , and I just saw a second hand one advertised on Amazon for $650!!
(Visited 45 times)
Comments (17)