“Why isn’t Ned dead? The Australians we still Believe in” This was the title of an article published a week ago by the on-line news site “The New Daily”. It was described as “News” though most of the discussion was about a paper that was published in the Journal of Sociology in 2014, which in turn was based on the results of a Survey carried out in 2011.
The ‘news’ being reported was that recently the legendary Australian musician Nick Cave and his son Earl were seen visiting the Kelly armour on display in the State Library of Victoria in Melbourne. Apparently, Earl has been selected to play Dan Kelly in the forthcoming movie adaptation of the Peter Carey novel, ‘The True History of the Kelly Gang’.  Nick Cave is reputed to have been obsessed with Ned Kelly when he was a kid – not surprising really because he was born and grew up in Kelly country and in 1967 when Nick was 10 his father Colin was Director of the Adult Education Center, Wangaratta, the place where that landmark Symposium ‘Ned Kelly Man and Myth’ was held. Colin Cave was the Editor of the 1968 publication of the same name which records the fascinating presentations and discussions of that symposium where Ian Jones gave first voice to his fantastic redemptive theory about Ned Kelly and the Republic of North East Victoria.
The article quickly went on to ask this question “how has a cop-killer endured, with much love, as a figure of ‘national importance’?”. A chart was produced of the top 20 people nominated by respondents to the questionnaire as the most important Australians, living or dead. Ned Kelly was slotted in at #15. The #1 was Kiwi-born eye surgeon Fred Hollows. 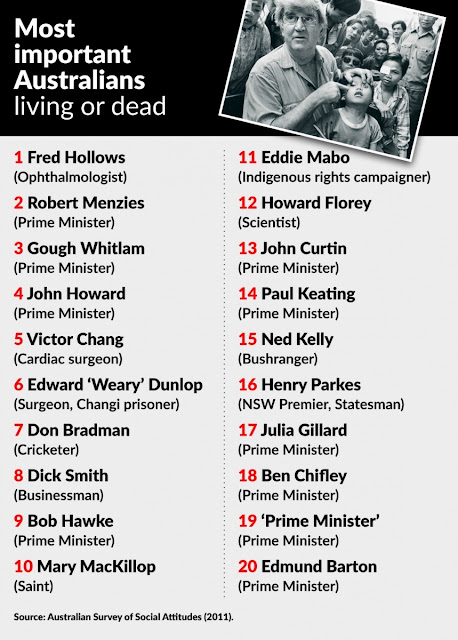 The article eventually concluded the Kelly Legend was not going away any time soon : “There’s too much money in it” according to Tim Hogan, Manager of Collection Development and Discovery at the Victorian State Library. And, according to ‘an historian with an interest in myth-making’ Dr Dale Blair of Deakin University, Melbourne, “ the revisionist crowd – who believe Ned was a bad man – won’t cut through. Because people aren’t interested in that story. Even if it’s true.’’
Kelly apologists of course are giving this article a big tick. I responded in the Comments section at the bottom of the article, comments which were duly noted by one of the contributors to the Facebook page originally dedicated to the vilification of Ian MacFarlanes book but is now predominated by hysterical attacks on me. It claimed I hated articles like that one, and went on to liken my remarks to a Tiger Moth crashing into Uluru – a big flash and a bang but in the end, the Rock remains, unchanged. This was the amusing analogy created by Ian Jones many years ago, predicting how successful revisionists would be. Very funny!
But I have to tell that person that this article, on closer examination has turned out to be something he will hate, because, knowing how often journalists are lazy and how often they write garbage I decided to track down the articles and the sources for the statistics to make sure we weren’t being fed bullshit. And we were! He’s going to hate it because its led to the discovery and broadcasting here that hardly anyone regards Ned Kelly as important or significant. He’s on the way out!
The Chart of who the most important Australians were was based on the 2011 Australlian Survey of Social Attitudes. Ive tracked it down. 1225 Participants were asked “In your opinion, who are the two most important Australians, living or dead?”  Guess how many of the twelve hundred respondents nominated  Ned Kelly as their number one pick? A miniscule 19!  Ned Kelly was the nominated first or second choice by 35 people, Fred Hollows by 150! To describe someone supported by 35 people in a survey of over one thousand as ” a figure of national importance ” is hyperbolic nonsense. Fake News by a lazy journo. 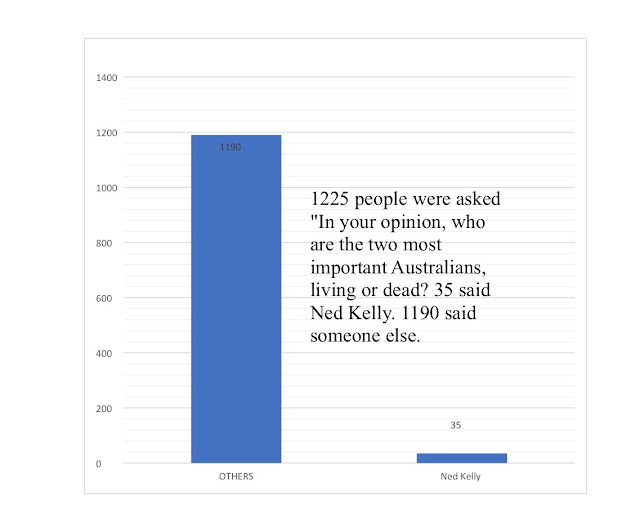 Participants were also asked “Many people throughout Australia’s history have influenced the way Australians see themselves in terms of their identity as Australians. If you had to choose among the following, which would be your first choice as the most influential? Aboriginal people/Convicts/ Free settlers/ Bushrangers/ ANZACS/ Immigrants after World War II/Sporting heroes/ Political leaders/ Other..”
The most popular first choice was ANZACS (47%) but Bushrangers were the least popular first choice (1%) In other words 99% of Australians think there are other more important influences on the national identity than bushrangers, and by that they mean Ned Kelly the name first on anyones lips when bushrangers are mentioned. Who would have guessed ? The Kelly apologists, and this journo think Kelly is “much loved” and wildly popular and admired, but these FACT tell us otherwise. This survey tells us that the huge majority of Australians don’t think Ned Kelly was important or particularly influential.
Evans, A. Australian Survey of Social Attitudes 2011, The Australian National University: Australian Demographic & Social Research Institute, 2012.
Now, when this Survey was undertaken Ian Jones was still in full flight, the Ned Kelly Forum and the Beechworth Ned Kelly weekend were still in existence, and the ABC documentary on the Glenrowan excavation had just been shown. The myth-busting works of MacFarlane, Morrissey, Kieza and Dawson were still to come. But even then, in what was a relatively pro-Kelly environment support for Ned Kelly was minimal, something which the Kelly apologists wouldn’t want anyone to know. But since then much has changed, and none of it would give any comfort to the Kelly apologists: quite apart from the exposure of the true story by the aforementioned writers, the Beechworth Ned Kelly Weekend has disappeared, the Ned Kelly Forum imploded, the Iron Outlaw Website has died, the tourist attractions are falling into disrepair, the crowd-funding  attempt to raise millions for a Ned Kelly Center raised a paltry $1100 and another one for yet another Kelly movie raised barely 5% of its target, and the only ‘pro-Kelly’ publications have been repetitions of the same old tired fairy stories. Since then all that will have happened is that support for Ned Kelly will have shrunk even further.
Heres the proof :  long term Kelly country tourist operator, Bob Hempel had this to say three months ago when asked about the new Kelly movie:
“I think there is Ned Kelly fatigue. We used to get 70,000 people through our doors a year, now it’s down to 20,000. Good luck to them, but I think some people are a bit sick of Ned.”
The only thing that’s keeping the myth alive now is crappy journalism like this News Daily article.  It would have been more honestly titled “Ned Kelly is on life support : an Australian almost nobody believes in”, and its time to turn the ventilator off. I think the analogy about Uluru and the Tiger Moth should be replaced with the story about the Emperor with no clothes. The King is dead people! Wake up! The  age of the Kelly myth is over! Nobody believes in him any more!
(Visited 108 times)
Comments (18)