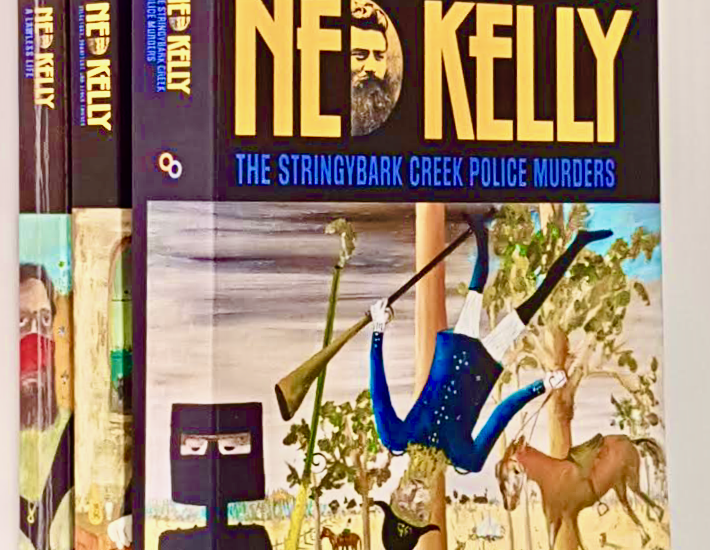 Well known Kelly sympathiser and conspiracy theorist demonstrating his unquenchable thirst for knowledge and the truth.His FB page is dedicated to discrediting a Kelly book he admits to having never read!

Writing this review of Doug Morrissey’s third and final book of the planned trilogy about the Kelly outbreak is proving to be an awkward dilemma, because even though in general I agree with most of what he has written, and with what he is trying to do in this book, there is so much about this volume that annoys and frustrates me that I am tempted to write it off altogether. However, for all its many faults this volume has at least one redeeming feature: the unadvertised fact that its actually two books in one, the second and I think probably more important book being the entire manuscript of Constable Thomas McIntyres memoir, ‘A True narrative of the Kelly Gang’ written in 1900. Even though this memoir is accessible through the Victoria police website, as far as I am aware it’s never been formally published before.

So, writing off the entire book would be a mistake, because my concerns are mostly the concerns of a picky Kelly history nerd, and an ordinary reader may well not be worried in the slightest about the things that infuriate me. However, I am going to mention them first, so I can finish on a positive note.

To start with, many people who read the first two books in the series complained about the failure to include references back to the original sources. Morrissey made reference to his doctoral thesis – which is not widely available – and complained that there had been so much re-arranging and mixing and disruption of files at the Public Records Office that his original references were no longer valid – and he didn’t go searching for them again. Many people expressed a hope that this latest volume would include them – but again, there are none. Even worse, there isn’t even an Index, something which the previous two volumes included, so he hasn’t even bothered to help readers find things they want to refer to  in his own book. Readers are simply expected to take Morrissey’s word for it that where text appears in italics, it’s a direct quote from a document he once viewed at the PROV or a library or somewhere, it’s not taken out of context, its quoted accurately, and nobody needs to bother themselves with going back to the source and reading if for themselves. However, as many of us know, the reality is that in the Kelly community, quotations are too often misquotes, are taken out of context or are incomplete and used to bolster a misrepresentation. To be clear I am not accusing Morrissey of deliberately doing any of that – but as he would be very well aware, this tiny space in Australian history is highly contested and if he wants to elbow out of the way the Kelly myth-makers and conspiracy theorists I don’t think it’s good enough for him to declare that the sources support his version and not theirs, take it or leave it. People who already agree with him will take it and those who don’t will leave it, because without providing a reference to the source of his claims that people can check for themselves the debate reduces to one person’s opinion against another’s. Without verifiable references a claim loses much of its authority: a great pity, in my view. Tracking down references is unglamorous tedious and frustrating hard work but he should have made the effort. To me, this failure reflects a lack of respect for the readership.

Next, it seems if anybody proof read this script, they did a very sloppy job of it indeed and left a legion of grammar and punctuation and spelling mistakes all through the book. I’ve never before read a book that is so full of such obvious blunders : I noted “too” instead of “to”, “boroughs” instead of “boughs”, ‘trail’ instead of ‘trial’, ‘prostate’ instead of ‘prostrate’, ‘gaol’ spelled ‘goal’ in at least four places – and an enormous number of annoying and bizarre punctuation errors, most of which were full stops in the wrong place, like this example from p3, which isn’t actually a sentence:
“It is interesting to note that when Dan and his cousin were taken into custody for the Winton disturbance.”

The next line is obviously the second half of that sentence which shouldn’t have ended where it did “It was Ned who arranged the arrest and said he would deliver the boys to Fitzpatrick and only Fitzpatrick…“. Here’s another sentence that’s been chopped into two by a full stop that shouldn’t be there: “So thorough were the gang in obliterating the camp that when the Mansfield rescue party arrived at the camp a day later. All they found were the bodies of Lonigan and Scanlan, a scorched patch of earth where the tent had stood, a single tin plate and Kennedys blood-stained notebook with pages torn out”

These ridiculous and disruptive punctuation mistakes are frequent and found throughout the book, and in the McIntyre text as well, though obviously are not what the author would have written but must be the fault of the editing software or spell-checker. They ought to have been corrected by a human reviewer. They indicate incredible carelessness by the Publisher.

So now we come to the content of this strangely disjointed book which begins with an Introduction written by Leo Kennedy, great grandson of murdered policeman Michael Kennedy, and finishes with five loosely relevant Appendices, including an interesting piece about Kennedys gold watch, and a poem. The rest of the book is divided into three parts, the first being about the lead up to the ambush at SBC, the second part being about the attack itself and the aftermath, and the third part is McIntyre’s Memoir which occupies the entire second half of the 400-page book.

The only thing I am going to say about McIntyre’s memoir is that Morrissey’s attempts to tidy up the structure of sentences and ‘make McIntyre’s 19th century prose easily readable’ was another stuff up, partly because the same punctuation gremlin affected this part of the book just as it had all the rest of it, but also because Morrissey’s meddling made it LESS readable in several places where I checked his version against the one you can read on the Vic Pol Website. I would have much preferred to know that what I was reading was exactly what McIntyre wrote rather than something that had been fiddled with by Morrissey.

In his discussion of the lead up to the murders Morrissey makes reference to the so-called  Fitzpatrick incident and writes that “Fitzpatrick was a regular visitor , drinking and carousing with the family while conducting a romance with young Kate, so he thought he could combine a visit to see his girlfriend with the arrest of her brother Dan.” At another point, Morrissey claims Ned Kelly and Fitzpatrick were ‘larrikin drinking buddies on a pub crawl in Benalla’ and he then goes on to wrongly describe what happened when Ned Kelly attempted to escape police custody, providing the narrative that lends support to the mythology rather than the facts. (The myth is that Kelly ran off to try to escape the humiliation of being handcuffed as he was walked from the lock-up to the courthouse but as Kellys own account in the August 1880 ‘Interview’ reveals, handcuffs were not contemplated until after he was recaptured in the bootmakers shop, after he had tried, on impulse out on the street to make a run for it. The important point Morrissey and all other Kelly biographers missed is that the myth contains the lie that police were trying to humiliate Kelly, and that’s what provoked his resistance when in fact police offered him the respect of the chance to walk freely to the Courthouse, but he took advantage of that and made a rash and foolish attempt to escape. This act of delinquent showing off was what resulted in the police deciding to handcuff him when he was recaptured in the bootmakers shop.)

For some inexplicable reason, in describing Fitzpatricks relationships with Kelly clan members in this way, Morrissey seems to have accepted the unfounded Kelly mythology about Fitzpatrick that he was a womaniser and a drunk. His only attempt in this book to justify his claim about Fitzpatrick conducting some sort of ‘romance’ with Kate Kelly is this rhetorical question on page 8 asked in the context of an observation recorded by Fitzpatrick after the melee in which he was shot. Fitzpatrick said that Kate ‘sat down and cried’: “Why else would Kate cry if she didn’t have some affection for Fitzpatrick?’ Morrissey asks.  There are of course many possible explanations of why she cried – she was only 14 years old –  but to suggest that her tears support the unlikely idea that she was Fitzpatrick’s ‘girlfriend’ is absurd. Equally absurd is Morrisseys claim that because its recorded that Kelly and Fitzpatrick were in a pub having a drink they must have been on a ‘pub crawl’. The circumstances around this incident are not explained anywhere by anyone from the time, so for Morrissey to claim they were on a ‘pub crawl’ is yet more unreferenced speculation.

Part one also contains brief but valuable biographies of each of the murdered police and of McIntyre, the sole survivor. Morrissey may not have realised it but his account of Scanlans police record provides a very good reason to reject his earlier characterisation of Fitzpatrick as a drunk. Here, he makes note of Scanlan’s police record which included several reprimands and fines for drunkenness, the last of which was in 1874. In 1877, his conduct was recorded as ‘much improved’ – indicating Police hierarchy awareness and concern about drunkenness in the ranks. In contrast to Scanlans record, the absence of even one such comment in Fitzpatrick’s police record is therefore significant, and seriously undermines Morrissey’s and Kelly clan claims about Constable Fitzpatrick being a policeman struggling with drink. There is in fact no evidence that he was.

NB : I Have limited Internet access at present so responses may take a day or two to be approved and Posted.