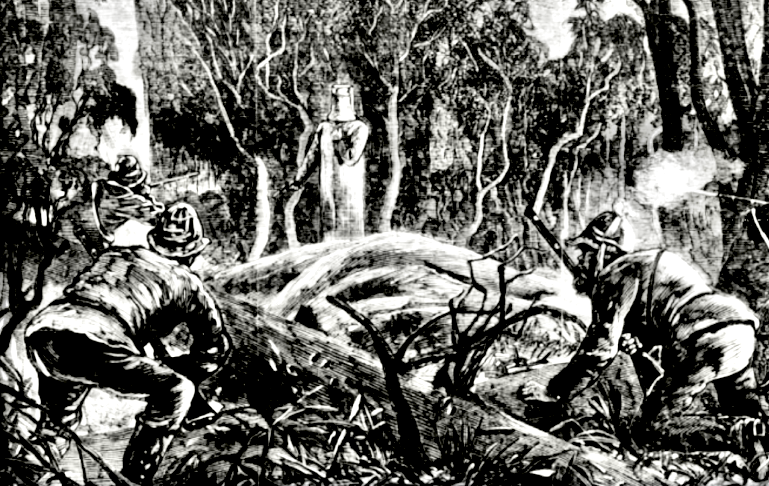 In my last Blog post I explained how Sgt Steeles image has been falsely smeared by Kelly writers who only gave half of the story of his involvement at Glenrowan. They all salaciously repeated the allegation Constable Arthur made at the Royal Commission that Steele had gleefully announced that he had shot ‘mother Jones in the tits’, and that the Royal Commission had severely criticized his behaviour and recommended he be demoted. But almost none of these writers referred to the fact that after Steele challenged those findings, a separate three-day enquiry was established and it “unhesitatingly and unanimously” recommended that Sgt Steele be acquitted of the charges made against him, and as a result he wasn’t demoted. Of the Kelly biographies I was able to check, – written by JJ Kenneally, Max Brown, John Moloney, Ian Jones (two books), John McQuilton, Ian Shaw, Grantlee Kieza, Peter Fitzsimons, Doug Morrissey, and Aidan Phelan – seven had adverse descriptions of Steele’s behaviour at the Siege but only one of them provided the second and correcting half of the story. So it’s no wonder that everyone thinks so badly of Sgt Steele: they’ve been thoroughly misinformed by writers who never bothered to check they had the whole story. Whether this omission by all these authors was deliberate or accidental, leaving out important parts of a story is something that happens all too commonly in books written about Ned Kelly, because most of them believe Ned Kellys lies about what gave rise to his outlawry and want Kelly to be portrayed as a great bloke who became a hero and the police as the villains whose corrupt behaviour gave him no option.

In this Post I want to add a little more of the background to what happened between Steele and Arthur.

When reading the reports of the Enquiry into Steeles behaviour, I thought that one of the most interesting observations that they made was that for almost a year after the incidents that Constable Arthur complained of, Arthur said not a single word about them to anyone:

“It is further remarkable that the alleged firing on Mrs Reardon by Sergeant Steele was not reported or spoken of by Constables Arthur and Phillips until the Police Commission sat, a period of nearly one year after the date of the Glenrowan affair. Nor was the conversation ever alluded to in any conversation or in any way whatever in the police barracks or amongst the constables generally.”

It’s hard to know why there was such a long and deafening silence, but given that the Enquiry concluded these allegations were not supported by the evidence of others who were there, one has to conclude they were made up by Arthur, made up not entirely out of thin air but out of the confusion noise and uncertainty that was the chaos of that unprecedented Sunday morning.

Certainly, as I reported in the previous post none of the people nearby who ought to have heard Steele claiming to have shot mother Jones in the tits, and Arthur warning Steele not to shoot at her again remembered such conversations, but there would no doubt have been many shouted conversations and half-heard exclamations and comments as events unfolded. At the Commission Steele said he knew when he arrived that Mrs Jones had already left the Inn so it would have been odd for him to then later claim he had shot her.  But why would Arthur make up stories about Steele? Clearly there was bad blood between Arthur and Steele, but why? To find the possible origins of that animosity one doesn’t have to look far: soon after it was all over, Steele accused Arthur of cowardice.

What happened was this: On learning of the siege, Steele rushed with his men on horseback from Wangaratta to Glenrowan in the dark of night and arrived just after 5am. It was still dark but the moon was up. He came across Arthur and Snr Constable Kelly sheltering behind a log and discussed what had happened up to that point. Steele believed they were too far from the Inn and needed to get much closer to prevent the gang from escaping, and pointed to the shelter of a large tree much closer to the Inn. SC Kelly warned “it was dangerous to go there. He said I would be shot before I got there. However, I made three cuts across and got to the tree”

Eventually Ned Kelly emerged from the trees and the mist, and initially Steele mistook him for a local aboriginal man and cautioned against firing at him, a fact which undermines the Kelly mythology of Steele being in a trigger-happy frenzy and shooting at anything that moved – and of course is not something the Kelly books usually mention. But then, when Ned Kelly drew back his coat and aimed his revolver at police, Arthur fired at him twice but Ned Kelly kept advancing towards them all, forcing some police to retreat, but not Steele:

Q9284. With reference to the police running- do you mean to convey that they ran away or opened up?

Steele: I say I think Constable Arthur ran a considerable distance. I do not say the other police. They went to shelter – they would have been shot if they had not. The others retreated from tree to tree, but the men that were there, as he came on the rear, if they did not retreat, he must have shot them – do not attribute cowardice to the men. Only Constable Arthur, who went an unnecessary distance away from the house.

Q9285 Kelly aimed twice at him, and he was the first man that fired at him?

Q9286 And you think he retired an unnecessary distance?

Arthur had previously claimed that he wasn’t retreating but finding a place from where he could shoot at Ned Kelly without endangering the lives of other police and bystanders. So, the Commissioners asked Steele:

Q9287 Where was he when he first retreated? (pointing to the plan)

Steele: There is the lying log there. About eighty yards from the house

Q9288Where were the people that were looking at the capture at the railway station?

Steele: Here (pointing to the plan)

Q9289 Therefore, if Arthur had fired with his rifle at Kelly, and missed him, was there a probability of his shooting the people at the railway station?

Steele : No, certainly not. It would have gone more towards the point of the spur of the hill

There is other evidence of the bad blood between Arthur and Steele, in the claim Arthur aired, again for the first time at the Royal Commission, that when Kelly fell by the fallen log just before he was captured, it wasn’t because Steele had shot him in the legs but because he tripped over a branch. Arthur claimed Steele fired at Kelly when he was already on the ground which would not have been an honourable thing to have done. Arthur seemed to be trying to discredit Steele’s claims about Kellys capture but the fact is that every other witness reported that yes, it was Steele who brought him down:

McWhirter, the reporter for the Age said this :

Q10349……saw a man coming rapidly down the side of the hill—that is from the direction of Mrs. Jones’s house and Sherritt’s to within about ten yards of Kelly, near the stump. He fired in rapid succession two shots, and Kelly disappeared, I suppose he fell. I could see his head before that, but immediately after those shots were fired he disappeared behind the log as if hit by the man. The police at once ran towards the outlaw.

SC Kelly: I believe so- could not say.

SC Kelly: I fired two shots, and with that he dropped upon his haunches like that-[explaining the same].

Q8241 If you saw a man fire two shots at another man who was standing up straight before the shots, and he falls then, is it reasonable to suppose it is from the effect of the shot that he staggered and fell?

SC Kelly: Yes, I considered so. Sergeant Steele ran and got him by the wrist and under the beard.

Dowsetts testimony also supported Steeles version:
“ As I thought I had a good shot for his head, he being not more than fifteen yards away, I fired, hitting him full on the head, but not having the slightest effect on him. As I fired I said, How do you like that, old man? ‘ He replied, How do you like this? ‘ and he leant over the log, firing as he did so. I saw Steele fire twice, I think, and he seemed to fall backwards. I ran up, and jumping over the log, saw Steele and he on the ground. I grasped the revolver from him as he fired, and Senior-Constable Kelly, coming up almost at the same moment, pulled his headgear off. Steele at once recognized him, and would have shot him, but I said, No, take him alive”

Dowsetts testimony also undermines a third attempt that Arthur made to discredit Steele, when without prompting, Dowsett reported that Steele got to Kelly first. Arthur on the other hand tried to cast doubt on Steele’s claim:

Arthur:-I could not swear who; there was a general rush, and we were all up about the same time.

So, what should we make of all this? Clearly it was a personal dispute between Steele and Arthur, who had a score to try to settle. In those days, no worse accusation could be made against a man than that he was a coward. Not that many years later, in the Boer war and WWI if they were ordered to, men were expected to advance from their trenches towards certain death, and any that refused were labelled cowards and deserters, and could be court-martialled and shot! So undoubtedly Steele’s accusation would have been a grossly offensive one if not true, and even if it was true, Arthur would have wanted to do everything he could to rescue his honour.

The idea that Steele was a villain at Glenrowan seems to have been invented by Arthur to discredit Steele as part of his defence against the accusation of cowardice. One would have to say he was largely successful, because these days it’s Arthurs version of events, that an unhinged Steele disgracefully shot at women and children that’s been told and retold in the Kelly biographies. However, a full examination of the record shows that this view of Steele is typical of the anti-police views of Kelly and his supporters, but is not supported by the evidence.

The list of elements of the modern sympathetic Kelly story that are unhistorical and unsupportable is long and still growing, and now includes the claims made against Steele. They were incorporated because one of the central elements of Kelly veneration is adoption of the same police hate that motivated Ned Kelly. Its time to move on, and return Steeles reputation to what it was in 1880 when his  contributions and his bravery and zeal in pursuit of the Kelly gang of murderous criminals was gratefully and enthusiastically recognised by the wider community, who presented him with a magnificent ceremonial sword. Engraved on it were these words :

‘Presented to Sergeant Steele, Victoria Police by the Moyhu Stock Protection Society as a testimony of the high esteem they entertain of his public services during the recent outbreak. Wangaratta 1880.’

7 Replies to “Steele vs Arthur : a tale of revenge”