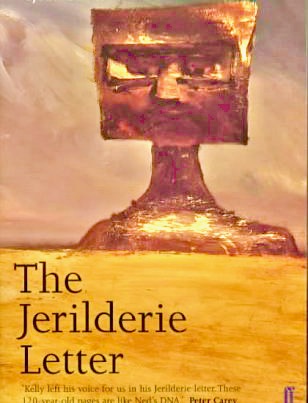 The other day the seemingly endless torrent of Kelly-related trivia that streams past on the Best Bloody Man FB page was interrupted momentarily by a link to a curious article about the Jerilderie Letter: “Outlaw Ned Kelly left behind a manifesto for the Ages” by left wing journalist Daniel Lopez. If it was hoped an interesting discussion would follow, a no-doubt disappointing one ‘Like’ and a single comment of two words – “He did” – was all it attracted. A bit further on an image of a large Ned Kelly Bottle Top attracted many more likes and comments (12 and 5 at last count) – a perfect demonstration of how little interest there is among Kelly devotees these days in anything other than the superficial and the light-weight. (No law against being interested in light-weight trivia but even though there’s so much more to the story than that, these people seem to be too afraid of what they will discover to ever want to go there)

Coincidentally, I had quite recently watched a 2018 Video posted on the Museum of Australia’s website that also claimed the Jerilderie letter was some kind of political manifesto. ANU Historian Bruce Scates, pointing at the JL in front of him, says breathlessly and with dramatic emphasis that Ned Kelly “planned another daring attack that would trigger a full-scale insurrection. In the Jerilderie letter here, he calls it his colonial stratagem. That train full of police and guns racing to Glenrowan would derail at a sharp curve in the line. The gang clad in armour would attack the survivors. Fireworks, fired by sympathetic Chinese would rally an army of Kelly sympathisers waiting in the bush and united, this poor rural community would declare a republic of NE Victoria”

To advance his argument about Kelly being a social justice warrior, Lopez uses the same extracts from the JL as Scates, and for that matter, the same ones as Ian Jones and every other author who advances an argument that Kelly and the JL were about a higher cause.

They all cite the same few quotes, the most popular one being: “It will pay Government to give those people suffering innocence, justice and liberty. If not I will be compelled to show some colonial stratagem which will open the eyes of not only the Victorian Police and inhabitants but the whole British army…”.  The other favourites include the order to police to sell up and give £10 out of every £100 to the widows and orphans and to then leave the colony, and this: “There never was such a thing as justice in the English laws. But any amount of injustice to be had”. There’s also the one about police making men mad by bad treatment, the final command that “my orders must be obeyed” and a few other minor quotes with very oblique if any genuine logical connections to anything like a political manifesto. The remarkable thing is that all the possible references to something that might resemble political statements and a manifesto amount to fewer than a couple of hundred words out of seven and a half thousand words in the entire document.  The only way anyone has ever been able to attempt to sustain that claim about a manifesto, as Scates and Lopez and Jones have all done,  is by cherry-picking out that same handful of quotes from widely separate places in the letter, even though they are unrelated to each other, and stringing them together to make something appear out of nothing.  The king-pin that is used to pull all these arguments together, and without which it would be almost impossible to make a claim about the JL being any kind of manifesto, is just two words: “colonial stratagem”. Exactly what Kelly had in mind as his ‘colonial stratagem’ was not spelled out by him anywhere: certainly, the words ‘Republic of North East Victoria’ are not found anywhere in the JL, and just the word ‘Republic’ isn’t found in the JL either, so ‘colonial stratagem’ has become the convenient ambiguity upon which anyone who wants to make an assertion about a republic or a revolution or an insurrection or whatever else they claim Kelly was all about can hang their theory on.

In fact, the notion that the Jerilderie Letter is some kind of political manifesto is fanciful. Anyone reading the JL with an open mind would never ever draw such a conclusion, because to do so one has to completely ignore the huge bulk of the letter, the readily apparent intent and tone of the letter, which consists mostly of entirely unmoderated expressions of Kellys anger and hatred of police and anyone who might assist them, and his self-serving versions of the various episodes in his life about which he felt aggrieved. This reality is made abundantly clear when the JL is compared with what everyone agrees was a first version of it, a letter written two months earlier and sent to MP Donald Cameron.

Take no offence if I take the opportunity of writing a few lines to you, wherein I wish to state a few remarks concerning the case of Trooper Fitzpatrick against Mrs Kelly, W Skillion and W Williamson and to state the facts of the case to you. It seems to me impossible to get any justice without I make a statement to someone that will take notice of it…”

Nothing could be clearer: Kelly is attempting to draw to the attention of the authorities his grievances about the various injustices which he thinks have befallen himself and his family. He hopes that by writing them all down in letter form, someone will take notice of them. It’s a long rambling self-serving tirade, littered with lies and misinformation covering everything from Whitty and Burns to the calf testicles, Lonigan’s interaction with him in Benalla, the Fitzpatrick incident and the SBC murders but he is clearly talking about his own and his families concerns and not the wider political system. “If my people (meaning his mother, Skillion and Williamson ) do not get justice, and those innocents released from prison, and the police wear their uniforms I shall be forced to seek revenge”

Two months later, the much longer JL covered the exact same ground and a few more incidents but in more detail, with more anger and anti-police sentiment, and new blood-curdling threats to anyone who might assist the police. Again its rambling and disjointed and self-serving, it is also more witty and colourful, but whereas the Cameron ended this way “With no offence (remember your railroads) and a sweet goodbye from Edward Kelly” the JL ends with the ominous “I am a widows son, outlawed, and my orders must be obeyed”. Clearly, Kellys anger and frustration at being ignored is starting to build, and the following year it erupted in that murderous showdown at Glenrowan where he hoped to kill dozens of police.

Confirmation that the JL wasn’t a manifesto but a mad list of personal grievances are the reported words of Kelly himself when he tried to get it printed. When Kelly couldn’t find Gill the printer at Jerilderie and handed the letter over to the accountant Edward Living, he didn’t say this is my manifesto, these are my policies and demands, this is my grand plan for the future of NE Victoria – what he was reported to have said was ‘All I want him for is to print this letter – the history of my life’

The idea that the JL was something other than what Kelly himself said it was, that it was some sort of manifesto, was a 1967 invention of Ian Jones who was looking for support for his “New View” of Ned Kelly. He extracted a word or two from here, a phrase or a sentence or two from there, loaded these fragments of the JL with meaning they never had, and hey presto: ‘proof’ of his ‘new view’ in the Jerilderie Letter.

This ‘new view’ was itself another example of Jones advancing what he felt was a ‘better’ explanation than the one Ned Kelly gave, in this instance for what was planned at Glenrowan. Kelly said it was about revenge, about killing police, robbing banks and setting his mother free but Jones couldn’t stomach such an obviously mad justification, so he invented his own one, his ‘new view’ which was that it was all about establishing the Republic of NE Victoria.

But that was over fifty years ago. Since then two central assertions that supported Jones argument for the republic have collapsed: a claim to have seen a Declaration document in London has been withdrawn and Thomas Patrick Lloyd has admitted to making up stories about seeing notebooks containing minutes of Republican meeting. More recently Dawson’s scholarship has exposed Jones claims of the republic of NE Victoria to be pure myth.(Theres a permanent link to Dawsons vital publication top right of this page)

All that remains, now that the Republic idea has sunk, is for everyone to admit that the Jerilderie Letter was not a foundational document for a republic or a political manifesto. That claim is yet another of the Kelly myths advanced by Jones and his uncritical followers, a claim which along with many others of recent invention that are headed for the dustbin of history.The truth about the JL is plainly obvious to any fair-minded person reading it  : its a jumbled crazy violent colourful frightening and at times witty and funny letter, its what Ned Kelly said it was all along: “the history of my life”.

PS  Heres a link to a well written piece about the Jerilderie Letter from The Conversation, 2014

31 Replies to “The Jerilderie Letter was not a Manifesto. It was a letter.”