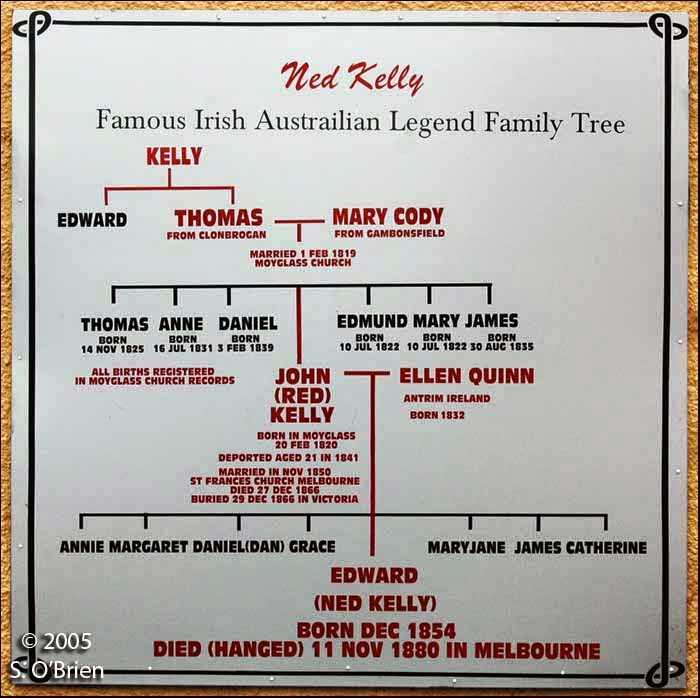 In so many ways the Kelly story is a tragedy from start to finish.

Neds father “Red” ( John Kelly) was transported to Australia in 1841 for stealing two pigs, valued at six pounds. The way this fact is usually presented, such as by Peter Fitzsimons in his recent book, and on Pro Kelly websites and in the Kelly hagiography, one is left with the impression this was a vindictive English cruelty imposed on a poor Irishman who stole in desperation from a wealthy landowner. And that’s about as much as you usually hear of this incident.
But if you read Ian Jones carefully – and Ian Jones is without peer in the Kelly literature in my view – you discover a much less sympathetic story, a story only Ian Jones seems to have the integrity to tell in all its depressing detail, but one which begins to explain the sad premature ending of Red Kellys life at only 45 from alcoholism.
Undoubtedly, Reds family was poor and life was an awful struggle. But the pigs he stole hadn’t belonged to a wealthy landowner but to another struggling peasant up the road. And worse, though Red was described by the local Police as “a notorious character” to further supplement his income he became a paid Police informer, and a few weeks before stealing the pigs, had joined in the theft of several cows in a Police sting that Red was part of. It went wrong and one of the thieves was shot and later died. Jones writes “Already branded an informer, Red now had to live with the guilt of the betrayed mans death”. He even suggests that the Pig Stealing incident was a “set up to justify his disappearance from the District” (page 4 and 5, “Ned Kelly :A Short Life” by Ian Jones ,2003)
As you can already see, the story is not as pristine as the Kelly mythmakers would have you believe.
So Red was “Transported “ to Australia and served 7 years as a convict in Tasmania. They would have been tough years and his existing bitterness against centuries of Irish oppression by English and Anglo-Irish would only have been deepened.
Neverthless after gaining his freedom and moving to Victoria he made a good start at a new life, marrying 18 year old Ellen Quinn – he was 30 by then – and earning enough from various occupations and from Gold digging to buy land.
Theres not much in the record about Neds arrival into the midst of this late 1854 or early 1855, but as he was growing up his fathers fortunes slowly slipped away as the bottle took a greater hold. He ended up selling his property for a loss. Peter Fitzsimons tells it like this “The family move into a tiny shack on a quarter acre in town with the one advantage for Red that it is much closer to either or both of Beveridges pubs; he is not particular”
Theres a remarkable catalogue of interactions with the Police by numerous members of the extended family for things like assault, cattle stealing, and horse stealing and eventually Red himself is convicted for “having illegally in his possession, one cow hide”. What happened, according to Ian Jones account, was that Red took a wandering calf with the Morgan brand on it, killed the calf and dressed it but kept the hide after cutting out the brand. When Morgan brought the Police, Red told them the calf was unbranded and pigs had dragged its head away but the Police search found calf skull bones in the fire, and the hide with a hole in it where the brand would have been. In court the charge of cattle stealing was dismissed, but he was sent to prison for 6 months as he couldn’t afford the Fine of 25 Pounds. The sentence was harsh but the process seemed to be fair.
(Visited 718 times)
Comments (6)