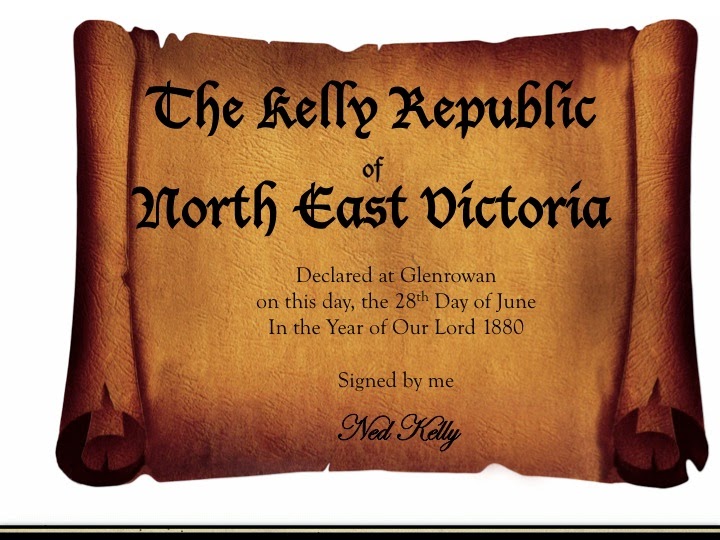 The next big problem for the republicans is their fond belief that somewhere out there is a document, a declaration of the Republic of North East Victoria, possibly taken from Neds pocket when he was arrested, that ended up in London and was seen by a Journalist in 1962. I seem to recall reading that it was only later that he realized its significance. The fact is that more than half a century has passed since that day, and nobody else has seen it, despite extensive searches being made. Develop a conspiracy theory about its disappearance if you wish, but the simplest and most likely explanation for its disappearance is that it never existed. Even a “highly reputable witness” – as Jones calls his informant – can be wrong.

Now, Chris H said that it was “absurd” for me to claim that there is no evidence for the Republic idea. He regards the talk about  a republic document, Mr Lloyds recollections and various other things as “evidence” though concedes they may not “add up to an awful lot”. I agree – they add up to almost nothing. An actual Declaration would be evidence, as would the exercise books, but I am not sure that conjecture about them is evidence. Perhaps I should have written ‘no credible evidence” or  “no useful evidence”
Kate asks me “What sort of evidence do you expect there to be Dee?”  Well, its not incumbent on me to disprove the Republican Idea. As Ive written elsewhere its  impossible to prove that a thing doesn’t exist. Its actually incumbent on those who claim that something exists to prove it – so, as Republicans say there was an actual Declaration they have to provide it, they have to find the exercise books or the Documents they say exist. I am not sure how long its reasonable to search for the required evidence before one can call time on the search, and conclude that no such evidence exists, but I certainly don’t believe anymore in Faeries at the bottom of the Garden, the Tooth Fairy, Little Green Men from Mars or the Easter Bunny. I cant prove that any of these creatures don’t exist, but I have waited long enough for the evidence and none has turned up. I am moving on and I think the same should be done in respect of the Republican Plot.
And Kate, you are absolutely right about my statement that “if something is claimed to exist but there is no actual evidence for it, its not rational to believe it” then “that would deny the existence of a number of religions” The thing that needs to be understood about Religions, and the Kelly religion is no different, is that it is NOT based on evidence or reason, but on Faith –  this is precisely why religions continue to exist, why people believe in the Kelly religion because they are NOT based on reason and evidence, but as you say, if they were, they would cease to exist. The great central evil of religions is to elevate Faith – which is belief without evidence – to a higher moral plane than reason – because once you have persuaded your devotees that Faith is everything, they are then immune to reason and evidence and can and are often persuaded to believe anything and do anything.
Here it is in Christianity : Thomas is rebuked by Jesus for wanting evidence and told that the people who believe without asking for evidence are Blessed:
“The other disciples therefore said unto him, We have seen the Lord. But he said unto them, Except I shall see in his hands the print of the nails, and put my finger into the print of the nails, and thrust my hand into his side, I will not believe.26 And after eight days again his disciples were within, and Thomas with them: then came Jesus, the doors being shut, and stood in the midst, and said, Peace be unto you.
27 Then saith he to Thomas, Reach hither thy finger, and behold my hands; and reach hither thy hand, and thrust it into my side: and be not faithless, but believing.28 And Thomas answered and said unto him, My Lord and my God.
29 Jesus saith unto him, Thomas, because thou hast seen me, thou hast believed: blessed are they that have not seen, and yet have believed.
I am on the side of Thomas. Here endeth todays Lesson!
(Visited 51 times)
Comments (43)