One of the lessons Harry Power is supposed to have taught Ned Kelly when he was his “apprentice” was that to survive as a bushranger and outlaw-on-the-run you needed to cultivate and maintain a network of  support within the communities that you moved between. Supporters were often family, and extended family and friends, obviously like-minded people who lived on the fringes of society and had little time for the Law but never-the-less maintainaed an outwardly respectable and legitimate lifestyle but for their own reasons raised no objections to the unlawful activities of the outlaw they would assist from time to time. I imagine they regarded the outlaws victims in some way deserving of their lot, and had no sympathy for them or the Police in their efforts to maintain law and order.  And of course they were pleased to benefit from the outlaws crimes, as he was obliged to pay for their silence and support in cash and kind. It was a mutually beneficial dependency of doubtful ethical quality.

I mention this because in thinking about the next two acts in the criminal history of Ned Kelly, the robbery of the banks at Euroa and Jerilderie, I realized there is a contradiction in the narrative usually spun by the Mythmakers which I hadn’t noticed before. They claim that as outlaws with no legal means of support, Outlawry forced the Kelly Gang to adopt illegal means just to survive.  The contradiction is that Mythmakers also claim Ned Kelly was a master bushman and was skilled in the art of bushcraft which if true would have meant he ought not have needed to rob banks to survive.
I forget where but I have read suggestions that in fact the Gang wasn’t as good at survival in the Bush as the mythmakers would have us believe, and they depended rather heavily on food and supplies being brought out to them by sympathisers.  In truth I imagine the Gang probably could have survived on its wits indefinitely out there, and therefore the reason for the Bank Robberies was not so much to provide for themselves directly  but to obtain cash to keep the Supporters on side. There is most definitely NO evidence that the robberies were “Robin Hood style” undertakings aimed at redistributing wealth from the rich to the poor, a myth I exposed in a Post on this topic  last year. Ned Kelly liked to talk about helping the poor but he didn’t ever actually do it himself – he actually robbed and stole and abused them when the opportunity arose. His orders about giving to the poor were hypocritical posturing, talk that he himself never backed up with action. The stolen money only ever turned up in the pockets of family and of supporters.
But what of the robberies themselves?  Most people hearing of Euroa or Jerilderie or Glenrowan imagine that holding an entire town hostage was an original, brave and imaginative innovation from the mind of Ned Kelly, and  some then go on to propose that Ned Kelly would have  been a fine General and a leader of men. In fact most of Ned Kellys exploits were not original ideas of his, but things he had picked up from others. He wasn’t so much an innovator as a quick learner and copy-cat, having adopted the survival lessons taught to him by others, notably Harry Power.  His role model for Bank Robbery was Ben Hall, the Bushranger from New South Wales who seemed to have far better reason for hating the Police than Ned Kelly ever did. He became known as a Gentleman Bushranger, though I expect that much of what was believed about him even then was sentimental mythmaking rather than historical truth. Never-the-less he had a reputation for fairness and became known as “Brave” Ben Hall. This reputation and notoriety was obviously something Ned Kelly admired from a young age. 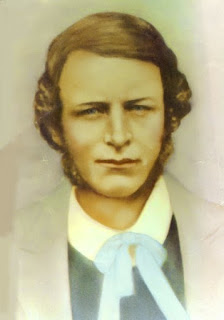 I wouldn’t be surprised to learn that there are actual recorded personal stories of this sort of post traumatic misery, depression, suicide, alcoholism and relationship difficulties by survivors and family of Kellys hostage taking, Bank robbing and general terrorising of Kelly country. I encourage anyone knowing of any to post a Comment.
(Visited 224 times)
Comments (33)

33 Replies to “Bank Robbery by Human Shield : Not so Brave Ned Kelly”