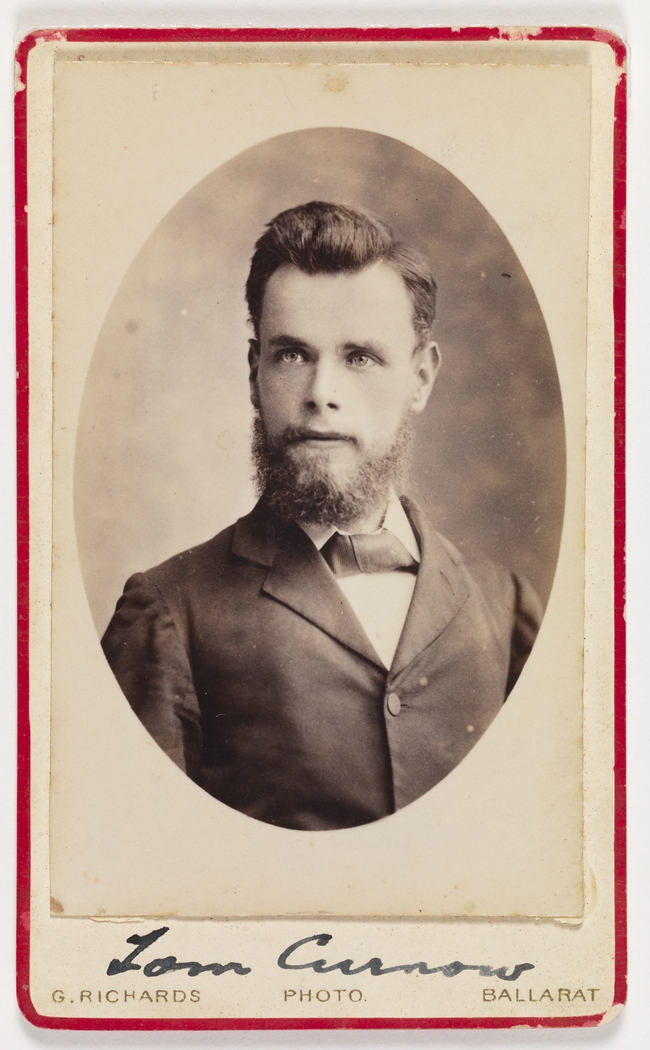 “Without a doubt, Thomas Curnow was the most pivotal figure in the story of what transpired as the Glenrowan Siege”
I read this statement on the website of Culture Victoria in a beautifully illustrated section about the Glenrowan School. It’s a thought that at first surprises, because commentary on Glenrowan is universally dominated by the violent and outrageous actions of Ned Kelly, the images of his armour and the siege at Ann Jones Inn.
But think for a moment about what the story would have been if Ned Kellys plan for Glenrowan had succeeded, and think again about why it didn’t : the answer is that a limping school teacher outsmarted the rampaging Kelly Gang, and a candle and a red scarf proved mightier than a hundred and fifty kilograms of armour, gunpowder, skyrockets, bullets revolvers and rifles.  All that seething hatred, all that plotting and angry scheming, the murder of an old friend and the imprisonment of a town full of human shields came to nothing because one man with a conscience was brave enough to stand up against wrong, and do whatever it took to stop the murder of innocent people in a train crash.  There can be no mistake – what Curnow did required extraordinary bravery, and he later admitted he expected to be killed in the attempt, but even his own wife’s pleas couldn’t dissuade him.
Read what he wrote a mere three weeks after the event, in his Statement to the Police:
“In overcoming Mrs Curnow’s opposition to my going for she was in a state of the utmost terror and dread, and declared that both I and all belonging to me would get shot if I persisted in going, and in securing the safety of my wife, child and sister while being away time passed, and just as I was about to start I heard the train coming in the distance. I immediately caught up the scarf, candle and matches and ran down the line to meet the train. On reaching a straight part of the line where those in the train would be able to see the danger signal for some distance, I lit the candle and held it behind the red scarf. While I was holding up the danger signal I was in great fear of being shot before those in the train would be able to see the red light, and of thus uselessly sacrificing my life.”
This man is the true hero of Glenrowan, and its about time his bravery was given the recognition that it deserves. Compare his bravery, a schoolmaster going alone with only a candle and a scarf, unarmed, with the “bravery” of Ned Kelly, armed to the teeth after weeks of target practice, enclosed in armour, protected by human shields, and a member of a gang….an extraordinary comparison!

The immense irony of Curnows actions was that by preventing Kelly from succeeding at Glenrowan, it became possible to ignore what was planned and instead create the Legend Of Ned Kelly out of what actually happened, as if that was all Glenrowan was about. The truth is that Ned Kelly planned an act of appalling and merciless violence at Glenrowan, and thus he revealed the true state of his mind and motivation : it was the mind of a mass murderer – No doubt about it.

The fact that he didn’t actually commit mass murder is neither here nor there in this context, because he didn’t abandon his plan, but was stopped from carrying it out. What was in his heart is what condemns him.

The truth is that if Kellys plan for Glenrowan had succeeded, and the Train had crashed and its passengers slaughtered by the Kelly Gang as was intended, there would never have been any argument about Ned Kelly being a hero or a villain. It would have been plainly demonstrated, by mass murder that he was a villain and Ned Kelly would be reviled for all history as a crazed mastermind and not a hero or an Icon. Instead, because that atrocity didn’t actually take place, Kelly sympathisers pretend he was a hero. They can only do this by deliberately ignoring what Ned Kellys plan revealed about the true state of his heart and mind. It revealed not idealism,or a vision and hope for the future but anger, hatred revenge and murder.

So what do the Kelly sympathisers websites have to say about Thomas Curnow, the man who made it possible for them to have a mythology? Searching both the Ned Kelly Forum and Iron Outlaw reveals he is mentioned in passing but to my initial surprise I could find absolutely no specific discussion about him, and yet, as the quote at the top of the page recognizes, he was THE most pivotal figure in the drama at Glenrowan. Without Curnow they would not have had a Legend to talk about and yet they have effectively airbrushed Curnow out of the picture entirely.

When you think about it though, its not that surprising because discussion about Thomas Curnow poses a difficult dilemma for Kelly sympathisers. If they praise him, they are admitting that what he did in stopping Ned Kelly at Glenrowan was a good thing – or, to put it the other way round, that what Ned Kelly planned was an outrage and it was good that he was stopped – but none of them wants to be caught admitting such a thing, supporting the authorities and agreeing that Neds plan was an outrage. On the other hand if they condemn Curnow, they are giving consent to what Ned Kelly planned for Glenrowan, the slaughter of a trainload of Police and other innocent people, an act that today would be rightly regarded as terrorism. People go to jail for a long time, for even planning let alone carrying such things out. How many Kelly sympathisers want to be associated with THAT kind of behavior?
So what the sympathisers do as far as possible is ignore Curnow, and they ignore the reality of what Ned Kelly planned for Glenrowan, a terrorist outrage that was stopped by Thomas Curnow. Its only by such wilful denials of the facts of history that myths like the Kelly Legend linger on.
I believe if we want to talk about heroism at Glenrowan, its not Ned Kelly we should be thinking of, but Thomas Curnow. Long may his memory live. He really was a genuine hero.
(Visited 77 times)
Comments (25)