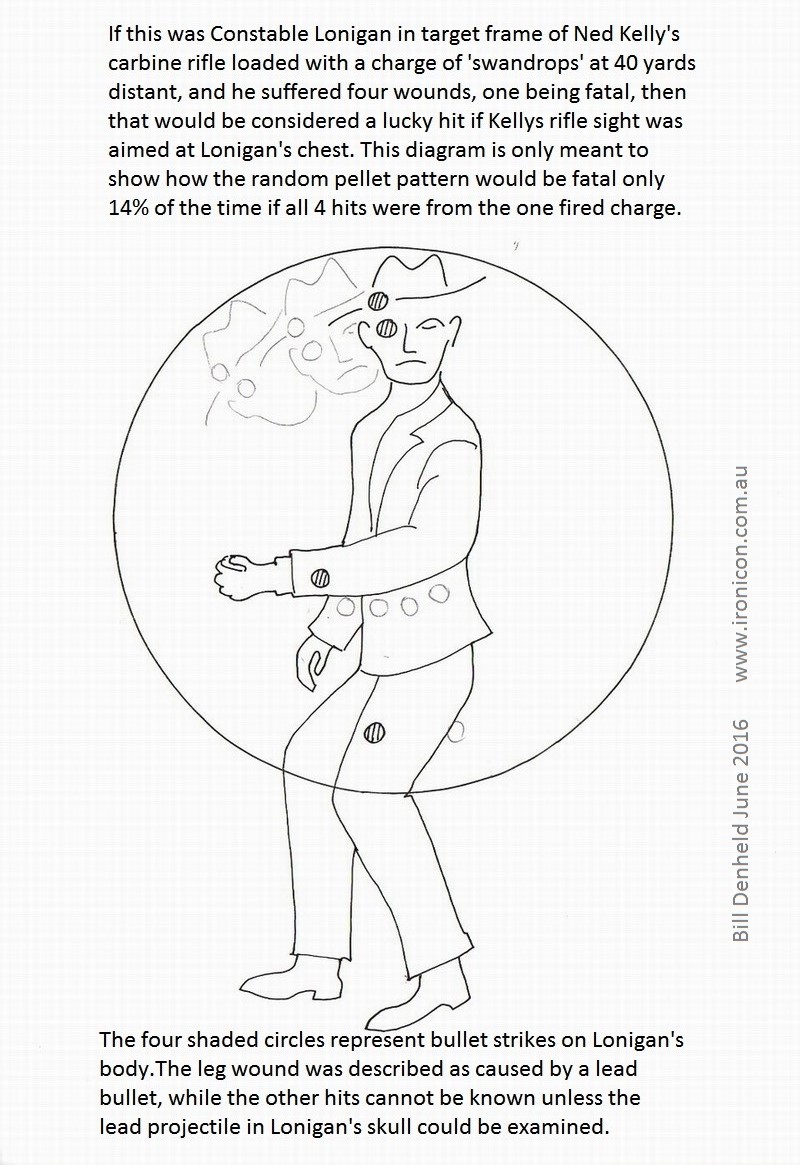 I liked Bills drawing so much I had to put it up as a Post for everyone to look at, and as an encouragement for the discussion to continue. Bill put this drawing up last week in our discussion about Lonigans death, a massive improvement on my own attempt at such a drawing that illustrates precisely what I believe the evidence points to about how he died.  I wanted to reply to various comments made on this topic in last weeks Blog Post but needed more space than is permitted on the Blogger Comments window, so hopefully we can continue this discussion here.
I am still convinced that McIntyres recollection, notwithstanding small variations here and there, was essentially accurate: Lonigan was killed by Ned Kelly whilst out in the open, firing from a rifle loaded with some form of multiple projectiles, possibly made by quartering a larger ball, or numerous swan drops that spread out as they approached Lonigan, and hitting him in four places at once. This happened the instant Lonigan made a move that wasn’t immediate surrender, when ordered to Bail Up.

NML thanks for taking the time to gather all those quotations, but I fail to see why they show that my version “does not fit” as you claim. You need to be a bit more specific about exactly what you think the problem is, but there is nothing in the quotes that you’ve supplied that doesn’t fit my view that Lonigan was killed in the open, and pretty much in cold blood.  Additionally you LEFT OUT a CRUCIAL part of McIntyres statement so I will supply a more complete extract of the relevant statement:

“I immediately held out my arms horizontally. As soon as I did so I saw the same man remove the gun a little towards his right hand and fire it, at Lonigan, who had started to run. Lonigan was standing on the opposite side of the fire to me, at a distance of ten or twelve feet. He was running towards a tree, and was about forty yards distant from the man who fired at him. I heard him falling immediately after the gun was fired. He had taken about four or five steps before he fell. Did not see him fall, but heard him breathing heavily and stertorously. ‘(From O&M ,07 August 1880. Report of the Committal hearing)

The crucial words here are “AS SOON AS I DID SO…..”  which mean, straight away after McIntyre put his hands out, Lonigan was shot, no doubt because he didnt put his hands up like McIntyre did, but made a move for his gun. He was certainly still out in the open, and I called that ‘pretty much in cold blood’. If  Kelly wanted to he could have fired a warning shot…

One issue that I haven’t addressed so far, which might be something you are referring to NML is the claim from McIntyre that Lonigan made a run for it, but only took a few steps before he was killed. Certainly this still equates to being killed out  in the open, but did he make a run for it? McIntyre admits he DID NOT SEE what actually happened, and so it is perfectly legitimate to question his explanation of what he thinks he would have seen if he had been able to. His honest admission that he DIDNT see what happened is his way of saying this is what I THINK happened, and that view has become the accepted view, but I think he got it wrong. This is why : the position of the wounds on Lonigans body makes it impossible that he TURNED and made a run for it – so in fact if he moved, and McIntyre says he did HEAR Lonigan moving, then what he MUST have been doing was backing up. McIntyre turned and saw Lonigan on the ground and assumed Lonigan had turned and ran, but the forensics PROVE he didnt TURN. If he HAD turned the bullet/slug/quarter/swandrop/whatever it was that entered his left thigh would have done so from the opposite side. This is utterly incontrovertible. Lonigan didnt TURN, he backed up.Its also reported that after he was shot he staggered about briefly, and that was how when he looked to see what had happened, McIntyre saw Lonigan on the ground a few steps away from where he had been when he was shot.

Alternatively of course, you would have to resurrect the post mortem origin of that wound in the left thigh, but that is CONTRADICTED by Dr Reynolds autopsy finding. Mike Jones thinks the Dr. wasn’t thorough enough for us to be able to believe his claim that the wounds were all inflicted before death or within a few minutes of it, but doesn’t give any reason for this statement. I have done a little reading on this topic, and it wasn’t fun seeing post mortem pictures of murder victims and autopsies, but Mike I think this quote should suffice :

“One major difference between an antemortem and a postmortem injury is the presence of signs of bleeding. While the person is still alive, the blood is circulating and any injuries such as cuts or stabs will bleed. After death, the body usually does not bleed.” (Encyclopaedia .com entry on Antemortem Injury) Its  a complex field of study, but I am sure Dr Reynolds would have been able to tell if there was bleeding around the thigh wound or not.

Mike its not a ‘contest’ but a search for the historical truth. Knowledge advances by picking the best explanation as the likely one and testing it until it either breaks and a better explanation is provided, or else if the prevailing explanation  stands up to  intense scrutiny, it becomes the accepted wisdom. I believe McIntyres version, as I have expressed it with the reservations about what he didnt see but assumed took place, makes sense of how Lonigan was killed. As I keep saying, the key to unravelling the mystery, is to realise Ned Kellys version was lies.