Stuart Dawson is doing some interesting research into the Kelly story.  He showed by detailed critical analysis of the major element of the Kelly legend known as the  “Fitzpatrick Incident” that it was a myth.Dawson showed that Fitzpatrick, whose name has been forever blackened by the Kellys, told the truth about what happened and it was the Kellys and their associates who were the liars. In another paper, Dawson researched the origin of the words “Such is life” which were supposed to have been Ned Kellys last, but they weren’t. They were made up by a journalist.
Dawson is obviously continuing to do groundbreaking research into Kelly history, but in the process has produced a wonderful little gem that he wants to share for free with everyone else who is interested in Kelly history. This time its the complete text of a work originally published in 1879, after the Fitzpatrick incident, after the murders at Stringybark Creek, after the Kelly gangs two Bank robberies but more than a year before the finale of the Outbreak, the debacle at Glenrowan. The Gang had been outlawed, meaning anyone could capture or kill any of its four members with legal impunity, they were on the run and public interest in the pursuit was at fever pitch. The entire state and beyond were  gripped by a mixture of horror fear and fascination at the Gangs exploits – for a journalist and publisher it was the perfect opportunity to write  and publish a book about the Gang, and make a tidy sum from what they no doubt hoped would be, and probably was, a best seller?
‘The following is the Text  I received a few days ago from Stuart Dawson. I take it as a complement to this Blog that he wants me to publicise his generous free gift to the Kelly world here ; Ive downloaded and read the book already and would encourage everyone else to do likewise.
_____________________________________________________________ 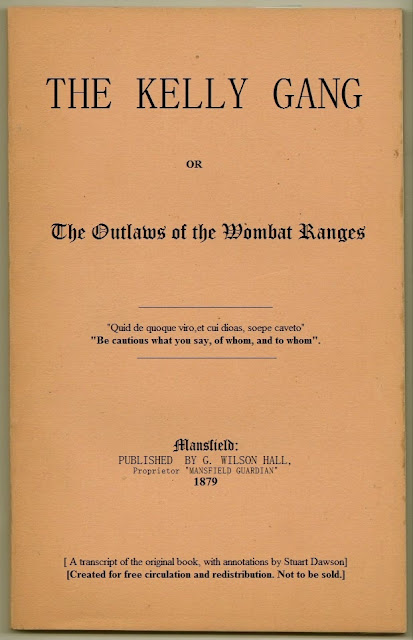 Thanks to Dee for letting me announce the release of a free, accurate transcription of the full text of G.W. Hall’s book, “The Kelly Gang, or, the Outlaws of the Wombat Ranges”, published in February 1879. There are only four copies in Australian state libraries, and no known private copies surviving. In this day and age it is great to be able to computer-search texts for words, persons, and places, but the only digital versions I have been able to locate (right up to this week) have textual errors, as well as spelling and punctuation mistakes. As I needed an accurate copy for research and citation, I made one myself from the Victorian State Library copy.
Having triple checked it for accuracy, it seems a shame not to share it. I have long believed that historically significant, out-of-copyright books should be freely available at no cost, whether as scans or transcriptions. This transcript is paginated exactly as per the original book. I have added some explanatory footnotes for obscure words and references. That should make this the most useful version of Hall’s text available.
As well as being free to download, it is also free to circulate and redistribute, email to friends, put on your website for others to download, use as a teaching resource, and so on. The only condition, as stated on the cover, is that it cannot be sold. It must always be free
Bill Denheld has kindly agreed to be the first download host of this new free PDF transcript of Hall’s “Outlaws of the Wombat Ranges”, and also did the great facsimile reconstruction of the title page. Grab yourself a copy from his fantastic IRON-ICON website at http://www.ironicon.com.au/gw-hall-the-kelly-gang-1879.htm  and share it around.
George Wilson Hall was the publisher of this work, but its authors are not named. It was most likely a collaboration between Hall and the unnamed ‘traveller’ (see the text, p. 123; Mr. Blank, p. 131). The preface is signed ‘The Authors’ as plural, on page vi, and it is dated 22 February 1879, shortly after the Jerilderie bank robbery of Monday 10 February.
Ned Kelly had unsuccessfully sought to have copies of his “Jerilderie letter” printed in that town. This book is a massively important historical document in its claim to give an impartial account of the Kelly outbreak up to the time of writing, regardless of Hall’s being on the committee for the ‘Murdered Police Memorial Fund’ (p. 104).
Hall was necessarily reliant on ‘inside’ information from the gang through an intermediary. He gives some skewed interpretations of events, such as that “Kelly did not recognize Lonigan at the time of the murders, so that his … death amounted to merely a coincidence” (p. 41). Yet Hall acknowledges McIntyre’s statement, that Kelly told him at first he had thought Lonigan was Flood (p. 44). If true, the “coincidence” vanishes, as Kelly repeatedly said he was out to kill Flood. At other places, too, Hall must be read with some alert scepticism.
After the Stringybark Creek shootings, “Within weeks, a hasty rewrite of ‘Fleeced; or, The Vultures of the Bush’, an eight year old bushranging play by Archibald Murray, re-subtitled ‘The Vultures of the Wombat Ranges’, was playing at Melbourne’s Princess Theatre” (R. Fotheringham, ed., ‘Australian plays for the colonial stage: 1834-1899’ [UQP, 2006], p. 553). Did that influence Hall’s subtitle for his Kelly gang book a couple of months later? We’ll never know!
Cheers,
Stuart
(Visited 42 times)
Comments (15)

15 Replies to “The Outlaws of the Wombat Ranges”