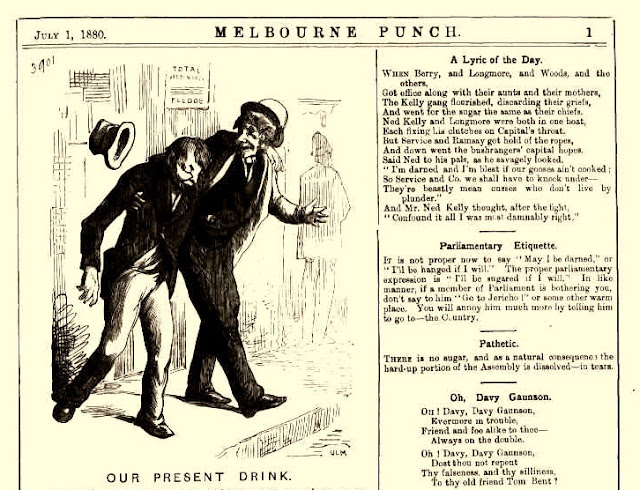 This article from a few days after the siege at Glenrowan should remind everyone that the Kelly Gang were supported then, as now,  by only a very tiny minority of the population. This was true even in ‘Kelly country’ where there were so few supporters that they couldn’t raise a few pounds to get their Barrister of choice for Ned Kellys trial. As for the Petition, in case you’re wondering, the numbers were swelled by a lot of fakes, but for most of them the issue wasn’t about Ned Kellys guilt but about his punishment. The petition didn’t ask for a retrial just for a reprieve. Then, as now, Capital punishment is regarded as inhumane, and demeans and cheapens society, makes it harder to uphold human values, and never served as a deterrent. The author of the petition was a well known solicitor, David Gaunson, leader with his brother of the anti Capital punishment movement.

THE KELLY GANG.
THE complete extermination of this band of cowardly murderers which was accomplished last Monday, is a matter for sincere congratulation amongst all classes, and we hasten to offer our hearty thanks to those concerned in the annihilation of a national evil. To the prompt and decisive action of Mr. Ramsay, and to the pluck and determination of Superintendent Hare and his brave associates, is due the fact that the country has been rid of the Kelly nightmare. 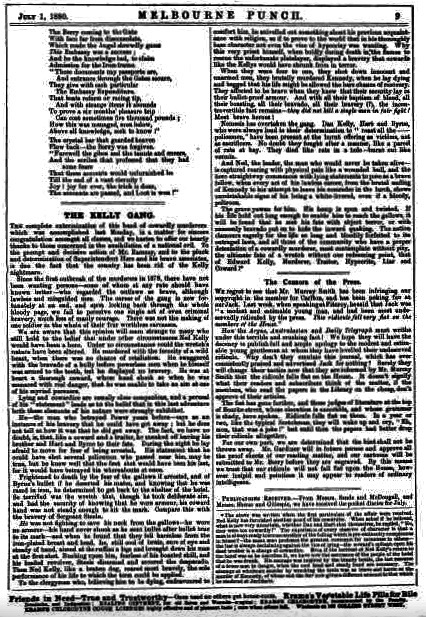 Since the first outbreak of the murderers in1878, there have not been wanting persons—some of whom at any rate should have known better—who regarded the outlaws as brave, although
lawless and misguided men. The career of the gang is now fortunately at an end, and upon looking back through the whole bloody page, we fail to perceive one single act of even criminal bravery, much less of manly courage. There was not the making of one soldier in the whole of their four worthless carcasses.
We are aware that this opinion will seem strange to many who still hold to the belief that under other circumstances Ned Kelly would have been a hero. Under no circumstances could the wretch‘s nature have been altered. He murdered with the ferocity of a wild beast, when there was no chance of retaliation. He swaggered with the bravado of a bully before powerless men when he himself was armed to the teeth, but he displayed no bravery. He was at heart a thorough coward, whose hand shook so when he was menaced with real danger, that he was unable to take an aim at one of his myriad pursuers. Lying and cowardice are usually close companions, and a perusal of his” statement” leads us to the belief that in this last adventure both these elements of his nature were strongly exhibited.
He — the man who betrayed Power years before — says as an instance of his bravery that he could have got away ; but he does not tell us how it was that he did get away. The fact, we have no doubt, is, that, like a coward and a traitor, he sneaked off leaving his brother and Hart and Byrne to their fate. During the night he lay afraid to move for fear of being arrested. His statement that he could have shot several policemen who passed near him, may be true, but be knew well that the first shot would have been his last, for it would have betrayed his whereabouts at once.
Frightened to death by the fear of the gallows if arrested, and of Byrne‘s bullet if he deserted his mates, and knowing that he was cased in iron, he determined to get back to the shelter of the hotel. So terrified was the wretch that, though he took deliberate aim, and had the security of knowing that he wore armour, his coward hand was not steady enough to hit the mark. Compare this with the bravery of Sergeant Steele. He was not fighting to save his neck from the gallows—he wore no armour—his hand never shook as he sent bullet after bullet true to its mark—and when he found that they fell harmless from the iron–plated breast and head, he, still cool of brain, sure of eye and steady of hand, aimed at the ruffian‘s legs and brought down his man at the first shot. Rushing upon him, fearless of his boasted skill, and his loaded revolver, Steele disarmed and secured the desperado. Then Ned Kelly, like a beaten dog, roared most bravely, the sole
performance of his life to which the term could be applied.
To the clergyman who, believing him to be dying, endeavoured to comfort him, he snivelled out something about his previous acquaintance with religion, as if to prove to the world that in his thoroughly base character not even the vice of hypocrisy was wanting. Why this very priest himself, when boldly daring death in the flames to rescue the unfortunate platelayer, displayed a bravery that cowards like the Kellys would have shrunk from in terror. When they were four to one, they shot down innocent and unarmed men, they brutally murdered Kennedy, when he lay dying and begged that his life might be allowed the bare chance of recovery. They affected to be brave when they knew that their security lay in their bullet–proof armour. And with all their baptism of blood, all their boasting, all their bravado, all their bravery (?), the incontrovertible fact remains—they did not kill a single man in fair fight!
Most brave heroes !
Nemesis has overtaken the gang. Dan Kelly, Hart and Byrne,who were always loud in their determination to” roast all the policemen,” have been present at the burnt offering as victims, not
as sacrificers. No doubt they fought after a manner, like a parcelof rats at bay. They died like rats in a hole—burnt out like vermin.
And Ned, the leader, the man who would never be taken alive— is captured roaring with physical pain like a wounded bull, and the hero straightway commences with lying statements to pose as a brave fellow, when every act of his lawless career, from the brutal ending of Kennedy to his attempt to leave his comrades in the lurch, shows  unmistakable signs of his being a white–livered, even if a bloody, poltroon.
The grave yawns for him. His hemp is spun and twisted. If his life hold out long enough to enable him to reach the gallows, itwill be found that he met his fate with abject terror, or with unseemly bravado put on to hide the inward quaking. The nation clamours eagerly for the life so long and bloodily forfeited to its outraged laws, and all those of the community who have a proper detestation of a cowardly murderer, must contemplate without pity, the ultimate fate of a wretch without one redeeming point, that of Edward Kelly, Murderer, Traitor, Hypocrite, Liar and Coward !
(Visited 122 times)
Comments (2)

2 Replies to “Victoria Rejoiced when the Kelly Gang was wiped out!”