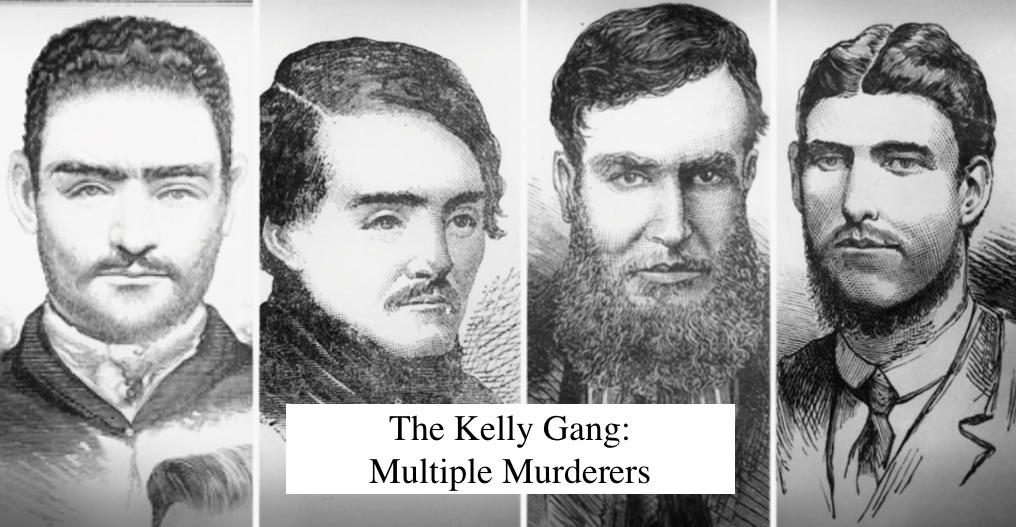 Next week it will be 142 years since the Kelly gang murdered policemen Lonigan, Scanlan and Kennedy at Stringybark creek, an appalling criminal act that horrified and shocked the colony. Ned Kelly claimed to have killed Lonigan in self-defence but now we know that was a lie: Lonigan was shot while out in the open within a few seconds of the order to ‘Bail up”. No warning shot, just a murderous blast of a quartered bullet that struck Lonigan in four places at once, killing him almost immediately. Horrific!

This is how Kennedys murder was regarded 142 years ago:

“The cold-blooded murder of the brave but ill-fated Kennedy when, wounded and hopeless of surviving, he pleaded to be allowed to live to bid farewell to his wife and children, is one of the darkest stains upon the career of the outlaws. It was cruel wanton and inhuman and should of itself apart from other crimes brand the name if his murderer, the leader of the gang with infamy”

These days, in the sympathiser circles where Ned Kelly is admired, the shock and horror that normal people feel when they learn about these murders has almost completely gone, and instead Kelly sympathisers blame the victims.  These days, Kelly sympathiser Facebook page moderators almost never object let alone try to correct it if someone writes that the police got what they deserved, that the police died in a fair fight, that they were armed to the teeth and were planning to murder the Kellys if they found them, that the police were crooks as bad as the Kellys, that they were mercenaries on the books of wealthy squatters, that they were in disguise, that they bought ‘body bags’ or ‘body straps’. Such comments are more likely to receive enthusiastic “Likes” than be recognised and dismissed as the sickening untruths and vilifications that they are.All of those claims are false.

But such is the state of their denial that Kelly sympathisers fill not just Facebook pages but entire rooms with images of this killer. Declaring their respect and admiration, even their love for him – yes, their LOVE for Ned Kelly – they compare tattoos and collections of Kelly memorabilia, repost images of their pilgrim-like tours of Kelly country, defend Kelly at every opportunity and usually kick out of their forums anyone who dares challenge them. Now and again you will read on the anniversary of this horror pious expressions of sympathy for the murdered policemen and for their widows and the children who lost their fathers, but usually in the same breath it will be solemnly announced that the gang members and their families also suffered, as if there is some sort of moral equivalence between the two parties. In fact, at Stringybark Creek, and at Glenrowan there weren’t morally equivalent people on both sides – there were policeman on one side and a gang of violent thugs and murderers on the other.

I’ve been asking myself lately how it is that the normal human reactions of shock and horror, of outrage at such extreme acts of senseless violence that enveloped the communities of the 19th century have been so dulled over the years that in the 21st century otherwise sane and reasonable human beings end up being admirers of the killer. The same puzzlement is induced by meditating on what Kelly planned for Glenrowan: an even greater mass murder that if carried out would undoubtedly have resulted in its perpetrator being remembered only as one of the world’s greatest and maddest mass killers. The plan – whether enacted or not – revealed what was in Ned Kellys heart, the true character of the man. What the plan revealed was something horrible and frightfully violent, and Kellys condemnation shouldn’t  be lessened by his failure to enact it :  Ned Kelly strove as mightily as he could, and was even willing to sacrifice the lives of innocent men women and children to bring it to pass. This is an undeniable fact!

However for the past 50 years Kelly sympathisers and admirers, following the lead of Ian Jones who championed Kellys cause, have said that these murders and planned atrocities were justified because Kelly was a political activist for a higher cause, that he was making a stand against authoritarian oppression and harassment, that he was engaged in a fight to establish a republic of NE Victoria.

But times have changed. There is not ONE SINGLE SCRAP of evidence that prior to the SBC murders Kelly was engaged in anything other than a life of crime centred on what Kelly himself called “wholesale and retail cattle and horse dealing”. It was in attempting to evade an arrest for horse theft that a policeman was shot and wounded, and in attempting to avoid being arrested for that incident, three other policemen were shot and killed at SBC – not the slightest hint of anything to do with politics or a republic or anything other than escaping from the Law.

Following the SBC atrocity the Kelly gang was on the run and survival was their only motivation. Jones claim that Kelly was a political activist with republic on his mind has been discredited by more recent scholarship, a finding which sympathisers are already beginning to accept, as demonstrated by prominent Kelly sympathiser and author Aidan Phelan who  makes no mention of a republic in his recently self-published historical fiction, “Glenrowan”, universally praised by sympathisers who have read it.

According to Ian Jones without such a noble motivation as a republic, what was planned for Glenrowan was reduced to a “criminal monstrosity” – and he was right.

So sympathisers, now that the Republic has gone and there is no higher cause to justify Ned Kellys murderous behaviour, how can you continue to admire and idolise the criminal who murdered at Stringybark Creek and who planned this monstrosity at Glenrowan – you no longer have an excuse! What the hell is wrong with you that the cowardly criminal murders of  Lonigan Scanlan and Kennedy – and lets not overlook poor Aaron Sherritt – and the criminal monstrosity planned for Glenrowan aren’t sufficiently ghastly for you to reconsider your admiration for the Kelly Gang and Ned Kelly in particular?

49 Replies to “KELLY SYMPATHISERS – WHAT THE HELL IS WRONG WITH YOU?”