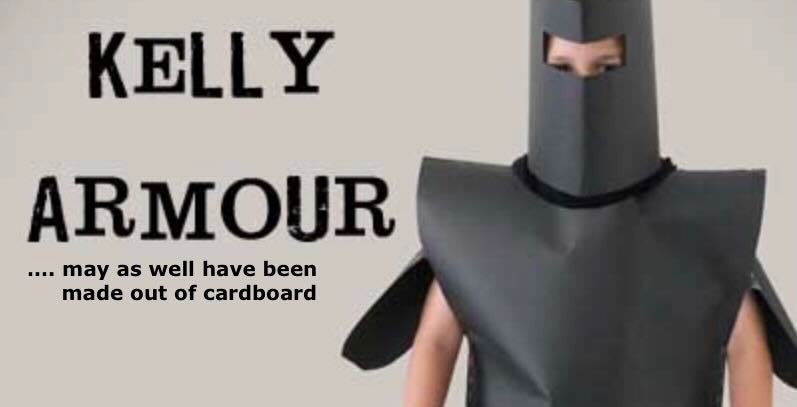 There was really only one thing that the Kelly gang did that was truly original: other Australian criminals had already committed more brutal crimes than the Kelly gang ever did, already murdered more police, already held up whole towns and shouted hostages drinks, already robbed more banks and written letters to explain themselves – but only the Kelly gang had suits of armour. And that is why they are still remembered.

Without suits of armour, Glenrowan would have been just a regular shoot-out, and afterwards the gang and its exploits would have drifted down the list of notable Australian lawbreakers into obscurity. Instead the menacing image of Ned Kelly advancing out of the dawn mist encased in a clanking suit of armour and the grim featureless mask with its bolts and black slit has become an enduring image that preserved and enhanced the memory of Ned Kelly as an agent of retribution and revenge, and possessed of almost otherworldly courage. It was claimed he was heroically returning to the Inn to rescue his brother and Steve Hart.

The reality however, was that by the early hours of June 28th the Kelly gang was surrounded, and escape was impossible –  capture or death were the only possible outcomes and Ned Kelly knew it.

During the siege, Constable Phillips overheard a conversation between Kelly and Byrne, and he reported it to the Royal Commission:

Kelly: Is that you Joe

Byrne: Yes, is that you Ned? Come here

Kelly: Come here be damned. What are you doing there? Come with me and load my rifle I’m cooked

Byrne: So am I. I think my leg is broke

Kelly: Leg be damned; you got the use of your arms. Come load for me. I’ll pink the buggers.

Byrne: Don’t be so excited the boys will hear us and it will dishearten them. I’m afraid it’s a case with us this time

Kelly: Well it’s your fault. I always said this armour would bring us to grief.

This conversation reveals several interesting things – firstly, as David Dufty pointed out in his new book “Nabbing Ned”  (reviewed HERE) , the armour was Byrnes idea. Secondly, well before the siege some Gang members had serious misgivings about the armour and thirdly,  during the siege they realised their doubts about it had been correct: the armour had seemed like a brilliant idea at the time but in practice was a disastrous mistake.

Not long after this conversation, Joe Byrne was shot and killed even though wearing his armour: the ultimate failure.

Later, as dawn broke, after lying injured outside in the dark for several hours Kelly pulled himself to his feet and staggered back towards the Inn and the police line – but he wasn’t returning to rescue Dan and Steve, as the Kelly myth would have you believe. When asked later to call on Dan and Steve to surrender he refused, saying he had no faith in them and that they were cowards.

No, Kelly knew that his plan had failed, there was no escape and he had given up. Instead he was returning to end it all, and take as many police down with him as he could. This wasn’t the brave last stand of a defiant rebel but a mad final act of desperation by an irrational killer whose mind would have been scrambled by the combined effect of all his injuries, the blood loss and sleep deprivation. But like everything else that had happened that weekend, even this mad last scheme failed: weighed down by the armour his mobility was limited and the helmet severely restricted his vision, with the result that every shot he fired missed its target. In less than 15 minutes he was brought down by Steele who fired at his unprotected legs. The armour had been utterly useless; Byrne was killed wearing it and now Kelly was in police custody. For the remaining hours of the siege Dan and Steve didn’t even attempt to use their armour: eventually they took it off and committed suicide.

To be fair, the armour had never been intended to be used in the way they ended up using it, in a hostage situation and a stand-off with armed police. The armour had been designed to be used at the site of a train crash, where, in a nightmarish act of unimaginable brutality surviving wounded disabled and disoriented police were to be shot where they lay in the wreckage. The Gang hadn’t expected to be surrounded and outnumbered by armed policemen capable of returning fire, but because the focus of their planning seems to have been all about the armour, planning for the rest of the attack at Glenrowan was grossly deficient and it was apparent right from the start.

When Kelly and Hart attempted to secretly rip up the tracks in the night at the very beginning of the operation, they discovered they didn’t have the right tools for the job. This simple mistake, to have not brought the right tools for the job was the crucial blunder that was ultimately responsible for the entire plot ending in abject failure. To get the right tools they were forced to go looking for workers who had them, and then having found them, to prevent their secret from getting out these men had to be held hostage at the Inn. Other people passing by then also had to be held hostage and eventually sixty-three people ended up being imprisoned at the Inn. Inevitably in all that confusion and chaos the secret got out, the train was stopped well short of the damaged track and dozens of police emerged and quickly surrounded the Inn. At that point it was game over – and all because they hadn’t thought to check they had the right tools.

From the gangs’ perspective, the Glenrowan campaign to slaughter any police who survived a train wreck, then go and rob banks and free Mrs Kelly, couldn’t have ended more disastrously … three gang members were dead, two innocent hostages were dead, no police were dead, the gang leader was in prison, Mrs Kelly was still in prison, and the armour which was supposed to have been the innovation that guaranteed their success proved to be the cause of their humiliating failure. Their only ‘success’ that weekend was the cowardly assassination of the unarmed Aaron Sheritt, a friend they mistakenly thought was betraying them – and armour wasn’t needed for that.

For the police though, it was a great victory over a gang of ruthless killers,  and the entire colony rejoiced that they had finally been made to face justice.

Once it was all over, Police Commissioner Captain FC Standish gave this reply to a request from the Beechworth Museum to display one of the captured suits of armour :

‘I entirely disapprove of this as its exhibition will keep up the disgusting Kelly heroism & have a very detrimental effect on the rising generation. My intention is to apply at once to the Chief Secretary to have the four suits smashed up at once.’

Standish was spot on: his prediction came true that the armour would become a focus for ‘disgusting Kelly heroism’ if it was not destroyed. Nowadays, almost every piece of Kelly memorabilia, every tattoo, every poster and Man Cave has a Kelly helmet on it somewhere, and who can forget Nolan’s famous paintings, where nobody has any trouble working out who is represented by a square with a black oblong slot in it.

The irony (see what I did there?) of using the mask as an emblem for the Kelly myth is that the armour was a total failure. The fame and admiration that the armour attracts is based on the lie that it was a brilliant innovation but the facts prove otherwise.  It became an obsessional focus of the gang who seemed to believe it was the answer to all their problems. It took them hundreds of hours to produce but it was absurdly heavy, it was almost impossible to walk around in, the wearer had greatly restricted vision so couldn’t raise or aim a rifle and in battle the design defects were so great that in a very short time two of the gang members wearing it were brought down. A greater flop in armament design is hard to imagine. Hundreds of hours in the making – a couple in the field to demonstrate its utter worthlessness!

Its a pity Standish didn’t manage to get the armour smashed up because now we have this legacy of ‘disgusting Kelly heroism’ to contend with, an idea that appeals to immature minds who think the example set by an Aussie hero is that violence can be a solution. I think it’s time to start laughing at the armour and the people who tattoo it onto their bodies and put Kelly mask stickers on their cars and in their man caves and on their t-shirts and stubby holders. We need to start asking them if they realise the armour was the Titanic of the Kelly outbreak – a complete and utter flop and the armour is the reason Kelly ended up dead.

Imagine a shipping line promoting its services with an image of the Titanic – that would be ridiculous! Imagine the Atomic energy industry using Fukushima as its exemplar – that would be ridiculous too, and it’s ridiculous that the armour has become the inspiration for ‘disgusting Kelly heroism’. Its time to call out the armour for what it was : a laughably complete stuff up by Ned Kelly.

4 Replies to “The Kelly Armour was worse than useless.”