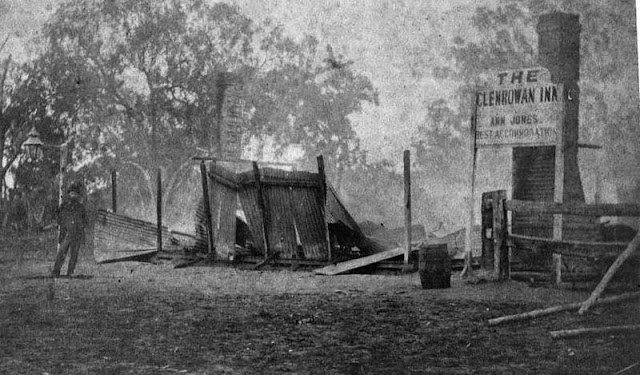 The book that received the least votes in the IO Poll was another one claiming to tell a “ true story” called “The True Story of Ned Kelly’s Last Stand” by Paul Terry.  I have just read it again, while I have been thinking and writing about Glenrowan. The excuse given for writing yet another “True Story” was an archaeological dig in 2008 at the site of the siege at Glenrowan, a now empty block of land where Ann Jones Inn once stood.  The book, published in 2012 is given a glowing rap on the Iron Outlaw site where its described as “an important addition to the extended Kelly Library”.  Sharon Hollingsworth gives it  another glowing rap, and a much more thorough examination – as one would expect – on her Blog at Elevenmile Creek. Its well worth reading (here).
This book has two parts running in parallel, one documenting the progress and findings of the archaeological dig and the other purports to recount the story of the Kelly Gang, not just of the last stand but of the entire story of Ned Kelly and the Outbreak. These chapters are interleaved with the ones describing the dig.
Lets deal with the Dig to begin with. It was conducted on behalf of the Wangaratta Town Council who were hoping to develop a “Kelly interpretive Center of National significance” in Glenrowan and “it was felt that the archaeological survey would provide some of the data needed to make the right decision”. One struggles to find a description of the kind of “data” that might have helped the Councils decision  making, or a statement of the scientific objectives of the excavation, or for a question or a conundrum that a dig might shed light on, but these criteria should have been defined at the start. Rather it seems to have been something of a fishing expedition, on a site about which just about everything was already known.  Was the Glenrowan incident not documented and recorded as it happened in minute detail by photographers and journalists, and investigated in Court and by a Royal Commission? Hadn’t the site been picked over, indeed ransacked time and again by amateur fossickers and souvenir hunters for more than 130 years?  Hadn’t the site been built over and rebuilt and demolished innumerable times since 1880? Weren’t the lives of colonial Victorians already extensively documented and recorded in countless archives and academic works contained in museums and universities and libraries all over Australia? What on earth were these people hoping to find? What questions were they hoping to answer?
There was never any doubt that they were going to find some sort of evidence of the original Inn, of a gunfight and of a fire, but there must have been almost no chance that they would find something unexpected. The low expectations of the scientific team are finally revealed in Chapter 13: the project had met its  scientific and historical targets once the Inn site and evidence of  a gunfight was found!
“The Inn had been found and there was tangible evidence of the gunfight seen in the molten scraps of spent bullets. It meant that the project had met its scientific and historical targets as now the diggers were right on top of the occupation layer they were looking for- Ann Jones Inn.”
As if they were unexpected, even trivial findings are reported with breathless hyperbole :
“When patient trowel work uncovered a thin disc of lead abut the size of a fingernail, Adam Ford knew he had fund what he had been looking for….they had found one of the hundreds of lead balls that had been fired into the pub during the siege….
…….This was a sensational find”
Sensational? Really? Given that HUNDREDS of lead balls had been fired into the Pub, I am at a loss to understand what was sensational about finding one? NOT finding one might have been sensational.
Because there were really no serious unanswered questions about the Siege that a Dig could hope to uncover, the Author attempted to resurrect the stupid conspiracy theory about Dan and Steve surviving in a cellar.  There have been several cranks over the years who claimed to be Dan Kelly, claims of the caliber of  UFO abductees  and 911 conspiracy, claims that were easily disproved years ago but to puff the book out a bit more the author needlessly raises  again, only to dismiss them in true trashy tabloid journalistic  style. There was no cellar.

All-in-all, though for Kelly enthusiasts of all kinds it might have been spine-tingling to see actual physical remnants from the siege, the scientific value of the Dig must have been almost zero.
The other technique Paul Terry employs to puff out his account of an almost pointless exercise in bad science, is to retell alongside it what he choses to call “the true story” of the Kelly Gang and of Ned Kellys last stand. Ian Jones says in his Foreword to the book “Few have written about Ned Kelly with such balance and with so few preconceptions….Here you will find no lofty and simplistic conclusions about Ned Kelly’s central role in this Wagnerian final act. Paul ignores the need for the hero or the villain of popular cliché…”
In fact, Paul Terrys “True story” is nothing of the sort – its pure myth of the kind relentlessly promoted by Ian Jones himself over recent decades. By claiming this work has “balance and … so few preconceptions”  Ian Jones reveals his own complete loss of objectivity in this matter, so utterly has he convinced himself of the rightness of his theory about the Republic and of the heroism and iconic status of Ned Kelly. The “Republic” idea is a conspiracy theory of Ian Jones that has almost nothing to support it, but Paul Terry, under the spell of Ian Jones has swallowed it almost completely:
“When Ned Kelly and his gang held Glenrowan hostage in June 1880 they were committing more than a crime. They were trying to start an uprising perhaps even a full-blooded revolution, to create a republic of North Eastern Victoria”
Such a statement, which is pure conjecture, should not be in a  book claiming to tell a “true story” – either that or drop the word “True” from the title.
Heres more, all of it pure fantasy, the sort of thing an adolescent might write in a school essay about Ned Kelly but not something that is supposed to be “true” “balanced” and free of “preconceptions”:
“ Driven into a corner he shouted his rage at the authorities but when they would not listen he went to war”
“Yet he was a man who spoke for a people with a legitimate grievance. These people were an underclass, grimly poor and DELIEBERATELY KEPT THAT WAY” (my caps)
“The best (land) went to the squatters and other men of money while the poor farmed stumps and rocks and lived in huts of bark and wood. When Ned Kelly found himself driven from society, his family dishonored and his mother unfairly slung in Gaol, he took a stand”
“Soon cash was flowing throughout the north east as dirt poor Kelly sympathisers suddenly found themselves flush with funds. Ned had not only pulled off a remarkable stunt worthy of Robin Hood, he had backed it up by robbing the rich to give to the poor”
Where does one start in trying to answer the myriad distortions, hyperbole and outright lies in these statements?  What I object to most about this book is its claim to be true, and its attempt to clothe itself in the respectability of scientific  endeavor.  Theres almost nothing of scientific value in this book, and this “True Story” is not the truth by any stretch of the imagination. I cant help thinking that the whole endeavor was really just another promotion for Ian Jones and his Republican mythology of Ned Kelly. Given the much more real and important controversy over the Stringybark Creek site, an Archaeological investigation in the Wombat ranges would have been a much more interesting and worthwhile project, but that probably wouldn’t have attracted the Public interest as much, or been as easy to film, and if I may say so, as convenient a vehicle to promote Kelly mythology.
And can anyone tell me what happened to the Interpretive Center?
(Visited 12 times)
Comments (3)

3 Replies to “And now, another “True” Story”