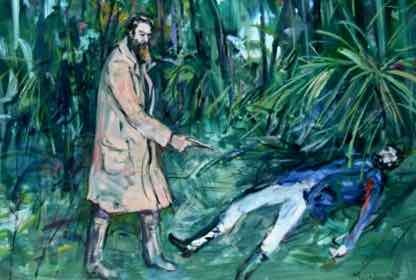 As recounted in the previous post, the Kelly Gang of four armed men bailed up two policemen at their Camp beside Stringybark Creek, killed the one who was armed almost immediately – Lonigan – spared the life of the unarmed one – McIntyre – and then laid in wait for the other two policemen in the party to return.

Kelly later made contradictory claims in the Jerilderie Letter about why the Gang confronted the police. He wrote in one place that “If they (the police search party) came on us at our camp they would shoot us down like dogs” and later“I was compelled to shoot them or else lie down and let them shoot me”, comments which seems to imply that because he believed the police had come to try and kill him and his brother – which would have been illegal –  he decided to kill them pre-emptively and claim it was self-defence. There was no history of Victoria police ever having done what Ned Kelly suggested they would do to him, to deliberately and in cold blood murder suspects, and the evidence from the time provides not a single fact to support that idea. To me, this explanation of Kellys seems more like a retrospective attempt at creating a justification and a potential legal defence for what ended up happening, the shocking multiple murder of policemen.

In spite of those words of his, I don’t think Kelly planned to assassinate the policemen at Stringybark Creek, because as he said himself, he could have done so without confronting them : “We could have shot those two men without speaking but not wishing to take lives we waited” .  Elsewhere in the Jerilderie Letter Kelly wrote something which to me seems more likely to be the truth: “We thought it best to try and bail those up, take their firearms and ammunition and horses and (then) we could stand a chance with the rest.”

Bailing people up and robbing them was what Ned Kelly had observed the older and experienced highway robber Harry Power doing several years earlier when 14-year-old Kelly was his so-called ‘apprentice’. Harry Power made it look easy and Kelly no doubt thought he would be able to do it just as easily, that he would confront the police, teach them a lesson, take what he needed and send them on their way, disarmed, embarrassed and humiliated. Why else would the gang have dressed up in the Greta mob outfit of brightly coloured sash and hatbands under their noses, before heading out to confront the police?  They were planning to show off. But Ned Kelly was a failed apprentice. Given how things went at SBC its apparent that Kelly failed to learn important lessons that Harry could have taught him, skills Harry had no doubt learned along the way, such as being selective about who you confront, about the difference between a coach-load of travellers and a party of armed police, about being able to command instant obedience with your voice and never firing a shot!

As a result of Kellys foolhardy overconfidence coupled with his ignorance of the subtleties involved, he blundered headlong into a confrontation that he lost control of almost immediately. Within a few seconds an attempted robbery turned into murder and Kelly would have known immediately that not only had his plan failed disastrously, but if he was ever caught he would probably be hanged. He probably started working on his ‘self defence’ claim right then, knowing it might be his only hope of escaping the noose, should he ever get caught.

However, though a policeman was dead, none of the Gang had been injured and they had acquired all the police ammunition, two police revolvers, a shotgun, four horses and any other items of police equipment they wanted. By waiting for the other two policemen to return they must have decided that the opportunity to steal two more horses and three more firearms was worth the risk of having another disastrous confrontation and more deaths, maybe even their own. Ned Kelly hadn’t learned anything.

So, inevitably, when Scanlan and Kennedy made their way into the camp later that afternoon, once again Kelly lost control of the situation almost immediately, panicked again and started shooting again. McIntyre had been ordered by Kelly to approach Kennedy and Scanlon and persuade them to surrender, but McIntyres account is that before he had even opened his mouth, Kelly emerged from hiding and shouted “Bail up, hold up your hands”. Kennedy initially appeared to think it was a prank and put his hand on his revolver, whereupon Kelly fired, just as McIntyre was saying they were surrounded and had better surrender.

Once again there are major differences between the accounts given by McIntyre and by Ned Kelly in the Jerilderie letter of what happened. Kelly claims the Gang only fired in response to police firing first – Kennedy, according to Kelly leaped off his horse and fired from behind a tree, and Scanlon, his rifle still slung over his back “fired at me with the rifle without unslinging it and was in the act of firing again when I had to shoot him and he fell from his horse”

We know Kelly lied about how Lonigan was killed, so we have no reason to accept as honest his self-serving descriptions of how Scanlan and Kennedy were killed. This is what McIntyre remembered seeing when Scanlan was shot:  “He let go his hands before he had reached the ground to seize his rifle which was strapped over his shoulder; in doing so he fell and in his efforts to scramble to his feet and at the same time disentangle himself from his rifle he fell again and both his hands and knees were upon the ground when he was shot under the right arm. I saw a large spot of blood appear upon his coat…”

As McIntyre said of Kelly “He incurred no more danger in shooting Lonigan or Scanlan than he would have done in shooting two Kangaroos; he simply gave the men no chance to injure him, and might have shot them down without challenging them, as they scarcely had time to realise their danger until they were shot”

The death of Kennedy was the most horrifying and pitiless killing of them all: like McIntyre he attempted to escape, but unlike McIntyre who had a stroke of luck when Kennedys horse came to him and he grabbed it and took off, poor Kennedy was on foot, and his only defence was a six-shot revolver: a six-shot revolver, and possibly enough spares for one reload, against four heavily armed men, intent on killing him. Ned Kellys is the only written account of what happened but given the lies he told about Lonigan and Scanlans’ murders, there’s no reason to believe it to be anything other than more lies and another self-serving attempt to deflect blame away from himself. Kellys claim that he mistook a blood clot for a gun is laughable, and his crocodile tears about being forced to shoot Kennedy dead at point blank range are contemptible: if he hadn’t wanted to kill Kennedy why did he chase him half a mile or more into the bush, peppering the trees along the way with bullets that missed him? But by the time the Gang chased him down, Kennedy was wounded and unarmed – so brave Ned Kelly put the rifle against his chest and fired, executing him on the spot. One forensic opinion was that Kennedy was standing upright at that moment; if true, Kennedy was exhibiting heroic courage at the moment of his death, but it also means he was nowhere near terminally wounded as Kelly claimed: terminally wounded people are collapsed and barely alive, not standing upright. It also was not a killing in self-defence. Arguably, if he could have been taken to Mansfield, Kennedy might have survived long enough to see his wife and children again, and conceivably recovered completely. Kelly took no chances and ruthlessly made certain we will never know.

Much is made by the Kelly crowd of the fact that when Sergeant Kennedys decaying corpse was found after a three-day search, it was covered by his police cloak. Ned Kelly claimed he was the one who placed it there, and his followers claim it was done as a mark of respect – speculation which is undermined by the fact that Kelly then ransacked Kennedys body, taking his watch, his wedding ring, and his notebook which was later found back at the campsite with pages torn out of it. Kelly was reported later to have told hostages at Faithfuls Creek that the pages torn from Kennedys notebook had been used by Kennedy to compose a farewell note to his wife and family, and that Kelly was going to deliver it – but the note disappeared without trace. Such was the measure of Kellys ‘respect’ for the doomed policeman.

The horrible truth is that it wasn’t by any standard a fair fight – it was an unholy massacre by an out-of-control gang of four murderous thugs, who from that evening on, were known as the Kelly Gang. However, their fate was sealed: death by hanging if they were ever caught. For the rest of their lives they were on the run.

99 Replies to “The Actual True Story of Ned Kelly : Part VII – The murder of Scanlan and Kennedy at Stringybark Creek” 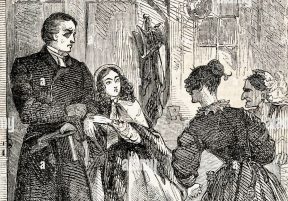 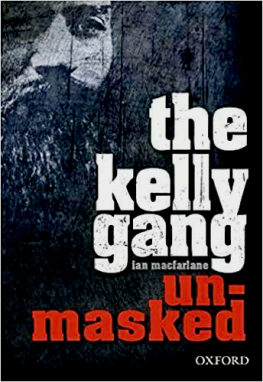 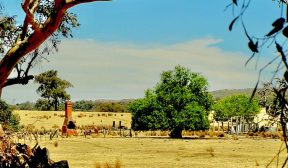 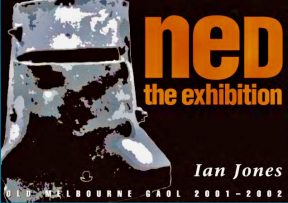 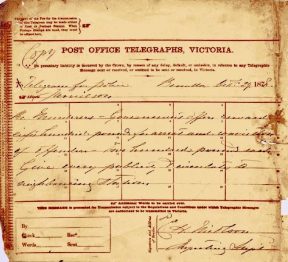