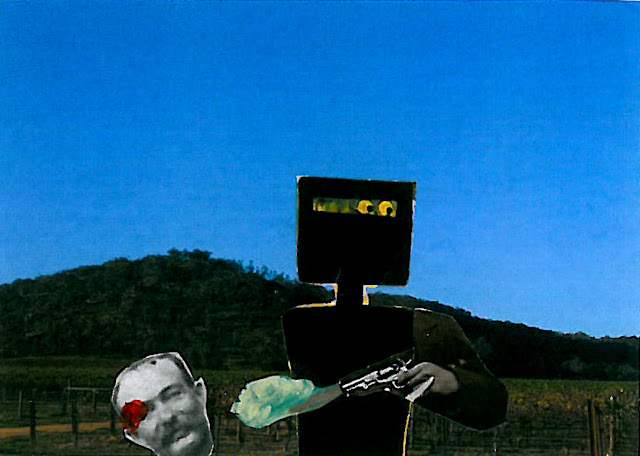 Here, as promised is the other Contribution Ive recently received from a Blog Reader. It was sent as an Anonymous Comment but I decided to make it into a new Post. As yet I haven’t received any further details regarding the exact Venue or dates so I am hoping when this Contributor knows them he or she will let us all know.
Dear Death of the Kelly Legend blog,
In response to a recent comment about George Metcalf on your blog, your readers might like to know that a Melbourne art gallery is planning an exhibition of 20 works by several artists critical of Ned Kelly and his gang, in early to mid-December.
I have attached a promotional photograph of one of the works, “First Class Peanut – Ned Kelly shoots George Metcalf”, for your interest.
Exhibition details will be announced once dates and opening hours are finalised, but it is not expected to run for more than six days, including a weekend.
The Public Records Office Victoria website, under
“Whats’ On :
Ned Kelly
/Exhibitions
/The Police Case”
gives the story of Ned Kelly’s accidental shooting of quarryman George Metcalf as follows:
Another Glenrowan Casualty Identified
Hidden among the documents in the Kelly collection are details of an unexplored incident at Glenrowan.
When considered in relation to the deadly, one-sided gunfight at Stringybark Creek (where three policemen were shot and killed), and the equally deadly and foolish plan at Glenrowan (where innocent hostages, including children, were killed), this incident magnifies the idea that the Kelly Gang was rather careless and accident-prone.
A detective’s report spells out the case:
‘Ned Kelly before daylight on that Sunday morning [27 June 1880] called out a contractor named Adolphus Piuzzi from his tent near the railway line and that Piuzzi attempted to use his gun when Kelly fired at him and very nearly shot him. And afterwards, later in the day, when [George] Metcalf was bailed up outside the Station Master’s house, Kelly was fiddling with this gun of Piuzzi’s when it exploded striking Metcalf in the face. The blood came from his face and Mr. Stanistreet’s son got him water to wash it off.
‘And Kelly then said, “I did not mean to fire, it went off accidentally”‘, the detective report concluded.
But there is a remarkable twist in the account. It seems that Metcalf, before he died a few months later from the eye wound, made up a story that he had hidden in a chimney and that a shot fired by police had bounced off the bricks striking him. It looked as if he wanted to get compensation from the government.
Unfortunately for him, several witnesses saw him being shot by Ned Kelly. A manslaughter charge against the outlaw could, and probably should, have been drafted. Certainly, Metcalf can now be safely added to the outlaw’s death tally.
Sources: Louis Waller, “Regina v. Edward Kelly” in Colin Cave (ed) Ned Kelly: Man and Myth, (Melbourne: Cassell Australia, 1968).
Again, I hope your readers may find this little-known Kelly story of interest.
(Visited 50 times)
Comments (41)