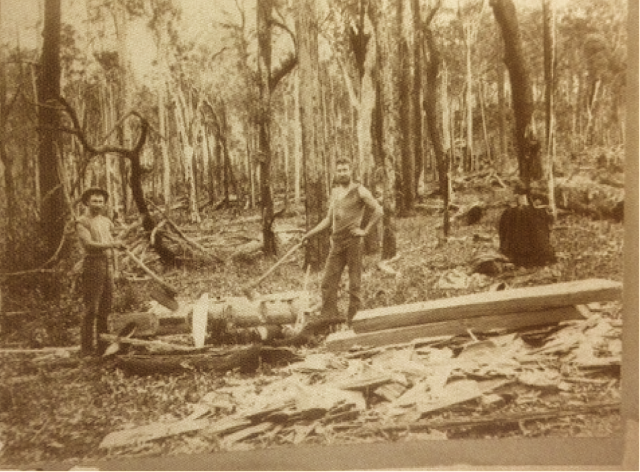 Next month the Ned Kelly Vault at Beechworth is going to unveil the ‘Alleged Ned’ photo they’ve been promoting for most of this year as possibly the Kelly find of the century. There has been much speculation and lots of interest in this photo, and no doubt, now they’ve announced that its public unveiling will be on Saturday November 12th, the excitement will build even further. They made me the generous offer of a private viewing some weeks ago, but not living in Victoria, I was unable to take them up on it. Peter Newman offered to go in my place and write a Post for the Blog about what he saw, but the Vault insisted the offer was exclusively made to me.
Undaunted, Peter embarked on his own investigation, and has now submitted a post on a photo which he thinks might be the ‘Alleged Ned’ photo that the Kelly Vault now has in its possession. I am not so sure, because the Vaults own promotional material on their photo clearly says it hasn’t been published or been seen in public before, whereas this one obviously has, albeit in a rather limited way.  It appeared in an Auction Catalogue along with the famous – or should we say infamous – “Gentleman Ned” Photo, the one wrongly identified by Ian Jones as being of Ned Kelly. The Auctioneers refunded the successful bidder the purchase price, once it had been clearly shown and accepted by all parties that the Photo was not of Ned.  This other photo mentioned by Peter Newman was passed in at the same auction and presumably returned to the family. One can only guess at the reasons for it not selling, but surely the most likely reason would be that nobody was certain it was Ned.
I thank Peter for this stimulating contribution: it will be interesting to find out next month if he’s on the money or not!
The Gentleman Ned photo was put up for sale at a Christie’s (Melbourne) “Australian Literature and Sport’ auction on 26thMarch 2002. That auction featured a large number of photos from the Ned Kelly  photographic archives, together with other Kelly memorabilia. Most of the photos were from a collection passed down from Ellen Kelly to her daughter Ellen Knight and grand-daughter Elsie Pettifer. Other photographs were from the Lloyd/Hart collection.
One of the photographs (No 123) is titled ‘Ned and Dan Kelly cutting sleepers’. Could this be the photo the Vault is talking about? If so then the fact it has previously been put up for auction means it is hardly a new find, although the catalogue states it had never previously been published.
The Catalogue contains the following description:
__________________________________________
123
‘NED AND DAN KELLY CUTTING SLEEPERS’ mounted sepia print, 110 x 150mm
A spidery blue ink description on the back is partly decipherable. It appears to refer to ‘Ned and Dan’ Certainly, some descendants believe that the two men in the photo are Dan Kelly at left, and Ned. However the photo itself and the men’s clothing suggest a date in the 1890’s, more than 10 years after the brother’s deaths. The mustachioed man at left is too old to be Dan Kelly (he died at 19) though the second man, with a half grown beard strongly resembles Ned Kelly. It is true that while Ned Kelly was growing his beard after release from prison in February 1874 he worked at a sawmill. But these two axemen do not look part of a commercial operation and, as already noted, they wear bush clothing that belongs to the 1890’s rather than the 1870’s.
In 1995, Ned Kelly’s niece Elsie Pettifer told Ian Jones that she believed the two men to be her father Walter Knight and his brother-in-law Jack Kelly/King. Jones accepts this identification, though Kelly pictorial expert Keith McMenomy is still tempted to believe the right hand figure is Ned Kelly. THE PHOTOGRAPH HAS NEVER BEEN PUBLISHED.
The mount is badly stained and torn but the image is completely undamaged.
$2000 – 4000
______________________________________________
Despite the doubt expressed about whether it is Ned, my own view is that it could well be him. The facial features look similar to me and the mans build is about right I’d say. However Christie’s say the clothing indicates the photo was taken in the 1890’s so perhaps it is Jack Kelly/King after all.
The Catalogue (which I viewed in the heritage Collection at the SLV) has a notation on it that indicates the photograph was either sold, or perhaps passed in for $1400.00.
The Catalogue contains a lot of other interesting photographs, many of which I had not seen before. Early 1950’s photographs of the Kelly Homestead at Eleven Mile  Creek were of interest, as were the  collection of photographs of many of the  sympathizers and others like Tom Lloyd who played a role in the Kelly story.
(Visited 62 times)
Comments (48)