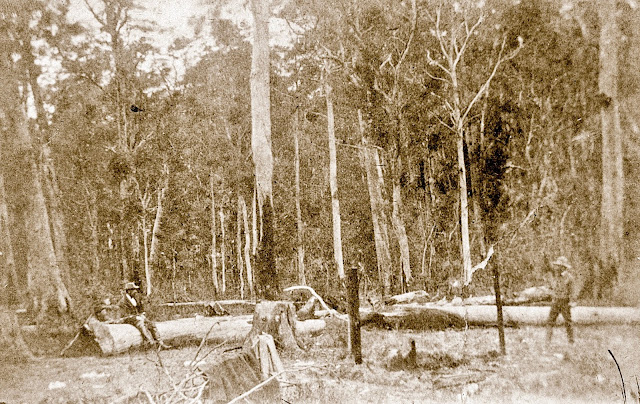 This is the actual place everyone is arguing about. This image was captured less than a week after Ned Kelly murdered Police right there, in that very place, by those logs. There are many things about this photo and its twin photo that have been debated at length over the years, and the debate goes on.
But lets discuss two things about this photo this week, two things that are absolutely crucial to the CSI teams argument about exactly where this photo was taken. They are two arguments that you MUST accept if you are going to give any credence what-so-ever to the CSI site near the modern day ‘Kelly tree’. If you cant accept these two arguments of theirs, its game over. If the boat wont float theres no point in arguing over how many propellers it had or what colour the Funnel was!
High up on the trunk of the large tree on the right is a black blob thats been called a ‘burl’ by the CSI team. It looks a bit like a map of Tasmania – no vulgarity intended – and the CSI team say its the same blob they noticed on a tree in a photo taken many years later at the so-called Kelly Tree. This one looks like a map of Japan – several bits in close proximity –  but they argue they are the same blob. So, having identified the same blob in two different photos, they say they’ve identified the same tree and therefore the two photos were taken in the same place. That’s their argument, in a ‘nut’-shell. 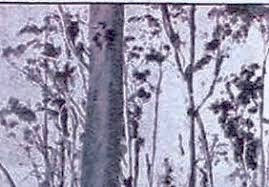 But if someone tried to convince you the map of Tasmania and the map of Japan were the same would you think they were dreamin’?   I think this is one of those ‘Emperor has no clothes’ moments – someone needs to pipe up and loudly say, well no, they are most emphatically NOT the same shape. Stop trying to convince us the Emperor is splendidly dressed – he’s not. Those two shapes are not the same. Stop it! Drop it. Move on. Linking these two photos in that way is absurd.
But that’s one argument you will have to swallow if you want to go with the CSI proposal.
The second one relates to the people in the photo. As everyone knows, after Lonigan was killed, the Gang waited with McIntyre for Scanlan and Kennedy to return, and when they were heard approaching the camp, Ned Kelly concealed himself behind a log and told McIntyre to sit on the log across to his left. Soon enough Kennedy appeared in the clearing, approaching from the North.
Now, Burman, the photographer who took this photo was taken to the spot by Monk, a man who a few days earlier was a member of the party that went looking for Kennedys body. McIntyre himself had returned to SBC with the search party and he showed Monk exactly what happened. This was within 48 hours of it all happening, so McIntyres memory would have been crystal clear. So, a day or two later when Monk took Burman back to the same place, he explained to him what McIntyre had shown him and Burman recreated the scene for his photo.
So look at the photo and what do you see: someone pretending to be Ned Kelly, crouched down with his rifle behind the log, to his left, seated, someone pretending to be McIntyre and both of them looking ahead at an approaching figure, his arm raised in salute – Kennedy, approaching from the north.
Now, thinking about how recently all this had happened, and who gave the information to Burman about where people were seated and so on, and given the presence of all these other people, the ‘actors’ in the photo who were probably as well informed as Monk was about what had happened there, ask yourself whats the chance that Burman got it all wrong? Not just a little bit wrong but completely arse-about face, with people facing south, sitting on and hiding behind the wrong side of the logs, and Kennedy approaching from the south? Somewhere between ‘Buckleys’ and none I would say.
But if you are going to accept the CSI argument about where the Police camp was, the CSI argument requires you to believe that Burman got it all wrong! It’s a crucial part of their argument but if you can’t accept their highly improbable proposition that Burman got it all wrong then you can’t back their case. Simple as that.
So if you know  anyone who lends support to the CSI teams site, ask them to explain explain why Burman got it all wrong, and if they think  the map of Tasmania and the map of Japan are the same. Don’t waste your time arguing with them about spear grass and seasonal soaks and if a creek can be a spring – these are all red herrings – the crucial argument is contained within Burman’s photograph. And we haven’t even needed to talk about the slope!
(Visited 76 times)
Comments (28)

28 Replies to “The Madness of the CSI Case” 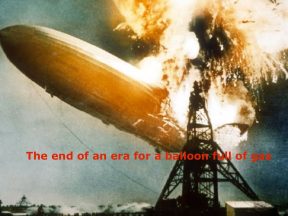 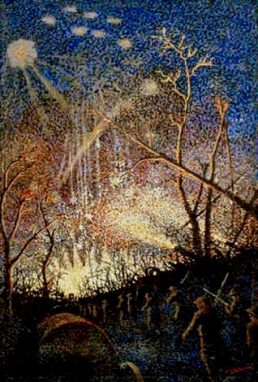 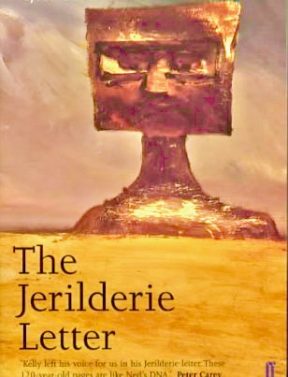 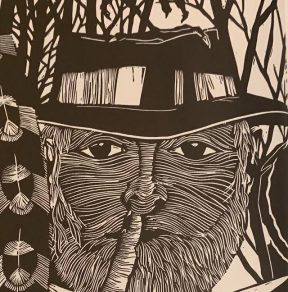 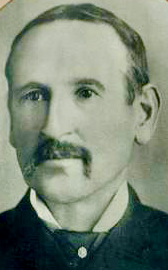