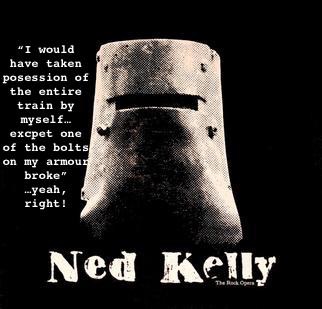 As most people know I run a couple of Facebook pages, their main purpose being to direct attention to this Blog. I also use them occasionally to respond to comments on the Kelly Facebook pages that I’ve been banned from and though its obvious the inhabitants of all those places keep a very close eye on what happens here on the Blog and on what I write on those Facebook pages of mine, very few of them ever comment. But what happens on Facebook is of almost no long-term significance because in a few days all discussions have effectively disappeared and become inaccessible except by tedious scrolling backwards – and who can be bothered?

Never-the-less from time to time over the last few months on Facebook I’ve been posing ‘Kelly Quiz questions’to try and stimulate some thought and discussion about the Kelly story, recently, for example, asking readers if they agreed with Ned Kellys assertion that he had been outlawed “without cause”. This quote is uncritically accepted at face value by Kelly supporters but its patently untrue – he was outlawed because he had murdered three policemen – but if Ned Kelly really did believe he had been outlawed ‘without cause’ then he was in serious denial, and so are Kelly supporters if they think that claim makes any kind of sense. This remark betrays him to be – well, I am not sure what it betrays him to be except that I can’t see that any normal adult who had been jailed twice and was on the run after a triple murder could fail to see that there was at least a case to be made  for him to be outlawed. Is it some kind of extreme narcissism that enables a person to believe that the laws that govern everyone else’s lives don’t apply to himself, or that his own judgement about what’s right and what’s wrong is the only judgement that matters, that the disapproval of his peers and of society in general is meaningless?

The point I am making is that Kelly support, and the entire pro-Kelly narrative  is mostly completely devoid of critical analysis, and is instead characterised by blind acceptance and approval as Gospel of anything Kelly is supposed to have said or done. This mindless pro-Kelly gullibility extends not just to Ned Kelly but also to the claims of Ian Jones, the sympathisers favourite Kelly expert, and to every other comment, commentator and opinion writer who supports the Kelly mythology.

My point is illustrated yet again today with a stream of affirmations on Jack Petersons  credulous Facebook page, agreeing with Ned Kellys claim that ‘there never was such a thing as justice in the English laws but any amount of injustice to be had’. Anyone who could be bothered to take an unbiased look at the way the Law dealt with Kelly clan criminality would see how stupid that statement is. Kellys own mother made use of the Courts to succesfully sue Bill Frost for maintenance, Ned himself benefitted on more than one occasion from the Law giving him the benefit of the doubt, his father and various uncles had charges dropped or dismissed for various often quite technical reasons, and if imprisoned they all received the benefit of remission of their sentences. The complaint that there never was such a thing as justice is just the usual bleating of criminals pissed off at being caught out. Ned Kelly was just another one.

The other thing Ive been exploring on Facebook is the extent to which Kelly supporters are familiar with their own literature. I showed a couple of weeks back with another question, that Kelly supporters aren’t well acquainted with the fact that Jones described Ned Kelly as a juvenile delinquent in 1967, (though he didn’t portray him as one in the 1980 mini-series, the Last Outlaw)

But much more important than Jones writing is the extensive archive of the writings of Ned Kelly that Kelly supporters either don’t know about or don’t want to discuss. There are actually dozens of pages of Ned Kellys writing that when subjected to critical analysis raise deeply troubling questions about the man’s state of mind and personality, but I can assure you they are never quoted or discussed anywhere in the Kelly literature and you’ll certainly never see them mentioned on Jack Petersons horrible  hero-worshipping so called “Introduction to Ned Kelly”Facebook page.

I tested this idea on Facebook last week with this question

Which of the following statements are true?

According to Ned Kelly, when Curnow stopped the train at Glenrowan:

It didnt surprise me that nobody guessed the right answer (or that Sharon was the closest!)

All of these claims were made by Ned Kelly in a letter written in the Melbourne Gaol and sent to the Governor of Victoria, the Marquis of Normanby, on November 5th1880. This letter, and three others written from the Gaol can be read on the Iron Outlaw site, in Justin Corfields Ned Kelly Encyclopaedia, and elsewhere, so serious Kelly followers have no excuse – they should be familiar with them, and the fact they are not is instructive:

Here are the exact quotes from the writings of Ned Kelly on November 5th 1880:

“Then I let a man go to stop the trainabout a mile below the railway station and opposite the police barracks and to tell them that they were in the barracks.”

“The reason I differed from the first plan is I wanted the man that stopped the train to have the reward,as I heard it was to be done away with in three days.”

“When the train stopped at the station I was opposite on horseback. I jumped off in a hurry to take possession of the train when a bolt broke in my armourwhich necessitated need to repair it. This gave the police time to get in front of the hotel and fire into the people.

When I heard the screams of the females I thought they had one of my companions in the gatekeeper’s house, as I took it to be Mrs. Stanistreet that was screaming so instead of taking possession of the train, as I had intended, I went to their assistance.”

As far as I know, nobody believes any of these outrageous claims – they are quite clearly lies. Its also quite clear that Kelly supporters don’t want to talk about them because, again, as far as I know, nobody has ever attempted to explain them, except perhaps to dismiss them as the desperate ramblings of a man on death row, affected by physical and mental injury, grasping at any chance to rewrite history and save himself from the gallows. If so, portraying him at the end as a desperate liar completely undermines the preferred Kelly supporter image of Ned Kelly as a towering hero, a fearless fighter for justice prepared to ‘die like a Kelly’ .  But if Kelly supporters are going to claim that his state of mind at the time was such that he wrote such outrageous lies, then how are they going to explain the other things he said in other letters that they like to quote, and not accept that they too are desperate lies? He wrote about Stringybark Creek and about the Fitzpatrick affair, he wrote about police persecution and how he had been made mad by bad treatment – are these all desperate lies too?

In fact, Ned Kellys behaviour in prison was not at all unusual for him. The fantasies and lies in those letters were a continuation of Ned Kellys usual practice. The truth Kelly supporters don’t want to face is that in fact Ned Kelly was a liar from way back, and he was encouraged to lie to the authorities from a young age. In 1863 Ned aged 8 and his mother – but, notably not Red Kelly –  testified under oath at the Kilmore court that Reds brother James Kelly was at the Kelly home on the night cattle were stolen in Beveridge.  They were not believed and James went to prison. Ned Kellys entire criminal stock thieving enterprise relied on lies about who he was – he used a fake identity as Mr Jack Thompson – and lies told to unwitting victims who were tricked into signing fake documents. The Jerilderie letter is full of lies – such as Ned Kellys description of what happened at Stringybark Creek and his claim to be 400 miles away from Greta at the time of the Fitzpatrick incident – and so is the claim that he was a police-made criminal.