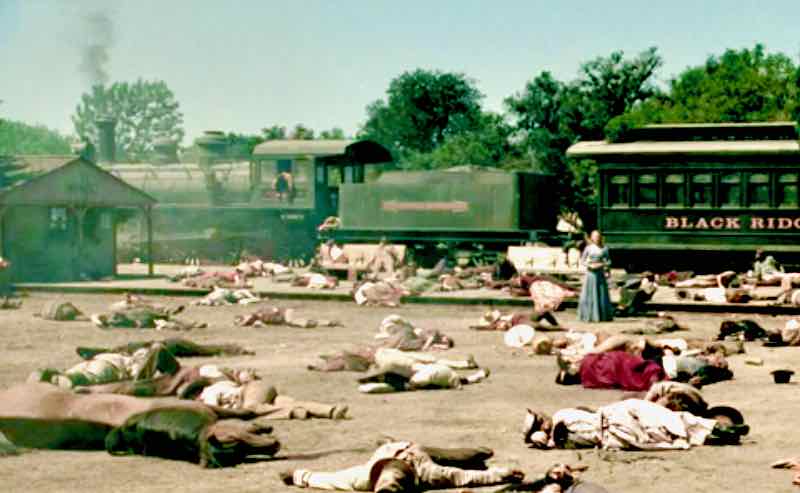 On one of his Facebook pages bushranger writer Aidan Phelan is asking us to ‘commemorate’ the Glenrowan Affair, by sharing our thoughts on what makes the Story ‘so gripping and engaging for us’. I am banned from his sites for having opinions he doesn’t agree with, so am unable to share my thoughts at that page so will do so here.

To commemorate something means to honour the memory of it, so my first thought was what exactly is it about Glenrowan that should be honoured? To answer that question, its necessary to put into perspective not just what actually happened, but to also think about what was supposed to have happened.

What actually happened is not too hard to describe : after murdering Aaron Sherritt and ripping up railway tracks at Glenrowan, the Kelly Gang took prisoners into the Ann Jones Inn. Next, a trainload of Police arrived from Melbourne and the police surrounded the Inn, there was a shootout, the Inn was burned down, three gang members and two civilians died, Ned Kelly was captured and a few months later tried and hanged.

What actually happened at Glenrowan was the destruction of the Kelly gang,  but that was obviously not  what  was supposed to have happened. What was supposed to have happened was the mass slaughter of at least two dozen people in a train wreck the Kelly Gang  had tried to engineer when they ripped up the tracks. Thats about how many corpses you can see in the image at the top of the post. Imagine the horror of a train crash at speed, and then the shocking sight and sounds of four masked men executing any survivors as they crawled from the wreckage, asking for help, pleading for mercy : thats what was supposed to have happened! Add to that the involvement of innocent people on the train who would have been killed or maimed and in an age without antibiotics or anaesthetic, condemned to a lingering and agonising death from blood loss trauma and sepsis. And lastly let’s not ignore the carriage-load of horses on that train. Those innocent animals would also have been killed or horribly injured and maimed, and mostly would have also been shot to end their misery. This entire scene would have been an absolute horror show, a nightmare of barely imaginable suffering, but that is what the Kelly Gang had been preparing to do for months.

When Kelly supporters think of Glenrowan they don’t ever think of the carnage that was planned : they are all in denial about that, and just ignore it. Instead they think of the armour, of Ned Kellys brave ‘last stand’, they see what happened there as the tragic destruction of the dreams of a revolutionary hero, brought down by an imagined great corrupt juggernaut of police and politicians who conspired against poor Irish farmers. They  think the people held hostage in the Inn by Ned Kelly were untroubled until the Police arrived,  and blame the Police for the loss of life there, they think there was a ‘sympathiser army’ waiting nearby to join the revolution and declare the region a Republic,  and they venerate the  famous symbols of the siege, suits of home-made armour that the gang wore when they confronted the Police on the veranda of the Inn. Kelly supporters also believe that if Ned Kellys plan had succeeded it could have resulted in liberating  political and social change, because according to them the north-east was in social and political turmoil, and Kelly was widely supported as their inspiration and leader. They think the siege site should be revered like the site of the Eureka rebellion is, and until recently they had an annual Memorial dinner to commemorate the whole affair.

Not that long ago, those views of the Kelly outbreak were seen as reasonable, even if they required deep denial of the fact that what Kelly wanted was a massive  blood thirsty police slaughter. The narrative produced and supported over the last fifty years by Kelly writers like Max Brown, John Moloney, John McQuilton and in particular the highly influential Ian Jones, at the very least suggested such an interpretation of Kelly history had merits. The Kelly complaints of persecution, the narrative about corrupt policemen like Fitzpatrick, the claim that the police murders were self-defence, the north-east was in turmoil, the notion of a republic  and the social bandit, the doubts that had been raised about Kellys trial and the possibility of self-defence being denied him – all these elements together made it possible to imagine Kelly might  have been a persecuted and misunderstood political figure! Others disagreed, and the debate devolved into a dispute about Kelly being either a hero or a villain.

However, in recent years there has been renewed interest and a great deal of new historical research into the Kelly story. The findings of modern Kelly historians Doug Morrissey, Ian MacFarlane, Grantlee Kieza and Stuart Dawson in particular have disproved and overturned as unhistorical many of the claims formerly made about the outbreak, and replaced them with an up-to-date and  historically verifiable new view.  Effectively the hero or villain debate has now come to an end in favour of ‘villain’. In particular Ian Jones theory of a republic has been comprehensively disproved by meticulous re-analysis of the historical record, and so we are once again left with the conundrum of what the Kelly gangs campaign of  what Ian Jones described as ‘monstrous criminality’ at Glenrowan was supposed to achieve. If it wasn’t a ‘Republic’ then what was it?

It might surprise Kelly supporters to learn that Ned Kelly himself did actually say what the siege was about – he wanted to disable the police, take hostages, rob the Bank in Benalla  and free his mother and friends from prison. And that was as far as his planning went. Theres nothing else anywhere. Nothing about a republic or a political campaign or some higher cause. Only killing, revenge, robbery and a prisoner swap.

The trouble with Kellys explanations of why he carried out the siege is that they reveal him to be completely mad! Who in their right mind would think that in order to spare your mother a few more months of gaol time it made sense to kill  Aaron Sherritt and all those police and anyone else unlucky enough to get in the way, and risk your own life and the lives of your brother and two friends ?  Why not just  wait a few months for her to be released? Or better still why not use some of the thousands of pounds stolen from Banks to fund an appeal? But no, sensible reasonable responses like those were not enough for Ned Kelly : he wanted to teach everyone a lesson they would never forget, he wanted to extract revenge and punish everyone he had come to hate with a passion a violent lesson they would never recover from. He wanted to make a name for himself as a hero. He was a pathological narcissist, a psychopath and his plan was ‘madness’.

As well as calling it a criminal monstrosity, Ian Jones himself described Glenrowan as ‘madness’, because only  someone completely off their rocker would ever think such a plan  made any kind of sense.  The logical conclusion of analysing what Kelly himself said was his plan, is that he was crazy – but thats  something Kelly supporters simply refuse to even contemplate, even though the insanity of Glenrowan stares them in the face. They adamantly refuse to believe their hero was off his rocker and so they pretend he didnt ever say those things about what it was all about and set off on a search for something else to explain the madness of Glenrowan. Jones invented the republic theory but thats now been debunked. Aidan Phelan also refuses to accept Kelly was mad, thinks he was just another complex human being like all of us,  and insists there had to be something more to it than what Kelly himself said – something ‘big’ – but he  cant say what, cant supply evidence of anything ‘big’ and is now writing a novel which one presumes will contain his fantasy about how what Kelly did wasn’t mad and wasn’t a criminal monstrosity. It will be pure guesswork without any historical basis, and it will need to contradict Ned Kelly himself. Whatever he comes up with, it wont be anything ever known to Jim Kelly or Thomas Lloyd the so-called Fifth gang member – if they had known of it they would have told JJ Kenneally and it would have been in his book, the one Kelly and Lloyd both endorsed as the complete history of the Kelly Gang. Theres always conspiracy theory of course….perhaps thats where Aidan is going next.

In fact, what the Glenrowan incident showed with frightening clarity was that Kelly was a uniquely obsessed and dangerous murderer. His own writings exposed his obsessional hatred of authority in general and the Police in particular, and at Glenrowan he attempted to carry out terrorist style mass police murder, revenge killings on a scale similar to the killings that took place at Port Arthur, a horrifying massacre that disgusts everyone.

Ned Kelly murdered three policemen in an atrocity at Stringybark Creek and picked Glenrowan to be the place where he would murder dozens more.  If it hadn’t been for the true bravery of  Thomas Curnow what would have happened there would certainly have been a criminal monstrosity, but even though he failed, Kellys plans still exposed him as consumed by hatred and  inhumanly cruel. If Kelly had succeeded that June weekend 140 years ago, its anniversary would have forever more been known as Glenrowans day of shame and infamy.

It is absolutely certain that had Ned Kelly achieved what he wanted to at Glenrowan, no sane person anywhere would be hailing him as an icon and great Australian. His memory would be reviled in the same way as the Port Arthur killer Martin Bryant’s is, and listed alongside Craig Minogue, Carl Williams and Julian Knight, the Hoddle Street mass killer.

The only thing to be commemorated on June 26th is that the career of a mass murderer was finally brought to an end, and the people to be honoured are the ones who brought it about, chief among them being the  courageous crippled schoolmaster, Thomas Curnow. Any  celebration of Kelly and the gang would be obscene.

7 Replies to “Why would anyone want to Commemorate the Glenrowan atrocity?”