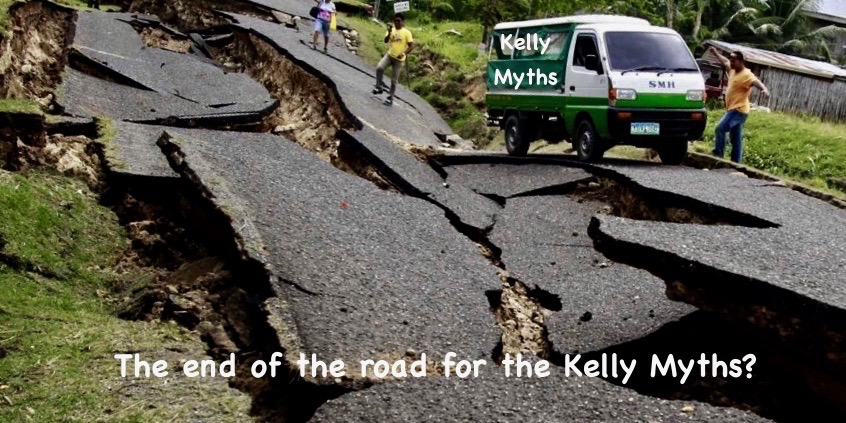 This is my first Blog post for 2019, and will be brief because I am on holiday and so, apart from a couple of books on my Kindle, I don’t have access to my Kelly library, the resource I often turn to when writing something more serious. Instead I’ve been thinking about what 2019 might hold for Kelly enthusiasts of all persuasions, and what my focus will be.

Last year four new books on the Kelly story were published – the second in Morrisseys planned trilogy, Leo Kennedys “Black Snake’ , a Kelly country travelogue and the most important one of all, Dawson’s free downloadable book about the Myth of the Kelly republic. This year already there has been one announcement about a book launch in Kelly country, but almost no detail was provided about this book and the planned launch date has been cancelled with, as yet, no new date announced. I am not aware of any other planned book launches for 2019.

Instead of books, 2019 might be a big year for movies. Already we know two starkly contrasting movies will be released, one being the big budget movie adaptation of an imaginary Kelly story, Peter Careys “True Story of the Kelly Gang”, and in a completely different league altogether, the  successfully crowd-funded small-budget local production about StringyBark Creek which is intended to be as close to the reality of what happened as its Melbourne student filmmakers can make it. For some unexplained reason Matthew Holmes of The Legend of Ben Hall fame is planning to do exactly the same thing, if he can raise the money, but he might be feeling a little nervous as two previous attempts at raising money for big budget movie projects failed. Details of the crowd-sourcing venture needed to fund his latest project are still to be released, but it will be interesting to see what kind of appetite remains for a Kelly film with an identical subject and aim as one already in production.

Iron Outlaw webpage is sponsoring a couple of Kelly related activities in the Northeast in the next few months. The first, on February 23rd, in association with the Greta Heritage Group is a day-long seminar focussed on the Kelly Gang armour. The second event, on April 6thand 7that Chiltern will be a series of presentations that cover many of the old largely resolved disputes within the Kelly story. Given the pedigree of the line-up of male speakers on Day 1, I can’t imagine those talks will be anything more than predictable restatements of Kelly dogma, recited to an audience of mostly true believers. The two women speakers, who will probably have something interesting and original  to say have been relegated to the Sunday morning, when I predict many delegates will have already gone. Such is life Noeleen!

This Blog will of course continue to comment on events and incidents in the Kelly world as they occur. I am particularly interested to find out if anything at all meaningful is going to emerge from the Ned Kelly Alive project, an expensive report to the local councils of the North-East last year that promised much but to date almost nothing concrete appears to have happened. The closed group of Kelly sympathisers will continue to thrive I suspect, but there will no doubt be fights and disputes that threaten it from time to time. Whatever happens on that site, being behind closed doors it wont impact anything. The remaining two or three barely active pro-Kelly Facebook pages will also continue to impact nothing as they carry on posting nonsense about the Kelly outbreak and on one of them more lies and slander about me, something I am certain will never stop, such is the intensity of one mans delusional failure to recognise the futility of his mad hateful crusade. The Ned Kelly Centre’s website will remain perpetually ‘under construction’ as it appears its administrator isn’t going to receive any of the funds she had hoped for from the NK Alive project. What she will now do with the Boxing Ned postcard she bought last year for a staggering  $70,000  is anyones guess.

In short, I am expecting that in 2019 the decline I’ve been documenting over the last few years in Kelly myth-related activity on the internet and on the ground is going to continue, and Kelly myths are going to continue to be replaced with true history. The die-hards planning to be at Chiltern are not even fighting a losing battle : the battle is lost and they are burying their heads in the sand.  For the fourth consecutive year there wont be a Ned Kelly Weekend.